Like much of the Peninsula, it has been a sellers market in the Burlingame neighborhood of Burlingame Grove (sometimes referred to as Burlingame Gate).

Here are some highlights for the Burlingame Grove real estate market as of February 2014:

The chart below shows the 12 month moving average median price, average price and average price per square foot in Burlingame Grove. Taking a 12 month average can help to smooth out random fluctuations. However, there are so few sales in Burlingame Grove that it can be difficult to get a reasonable view of price trends just by looking at the summary data alone. In a short time frame an increase in average or median prices is more likely to be due to a change in the type of homes that happen to be selling as opposed to a change in the underlying value of those homes. For example, the average selling price in October 2012 was $2 million (based on a single sale). In June 2013 it was $847,000 (once again based on a single sale). Even smoothing the data does not alleviate these issues.

Based on the individual sales in the area, along with what we are seeing across Burlingame, there is no reason to suggest that prices are not at record highs in Burlingame Grove. For example, a 3 bed, 2.5 bath home sold at 1108 Oxford in late 2013 for $1.6 million. The home has previously sold in late 2007 (which was the top of the prior market peak) for $1.5 million. An increase of 7% from previous market highs aligns with what we are seeing across Burlingame. 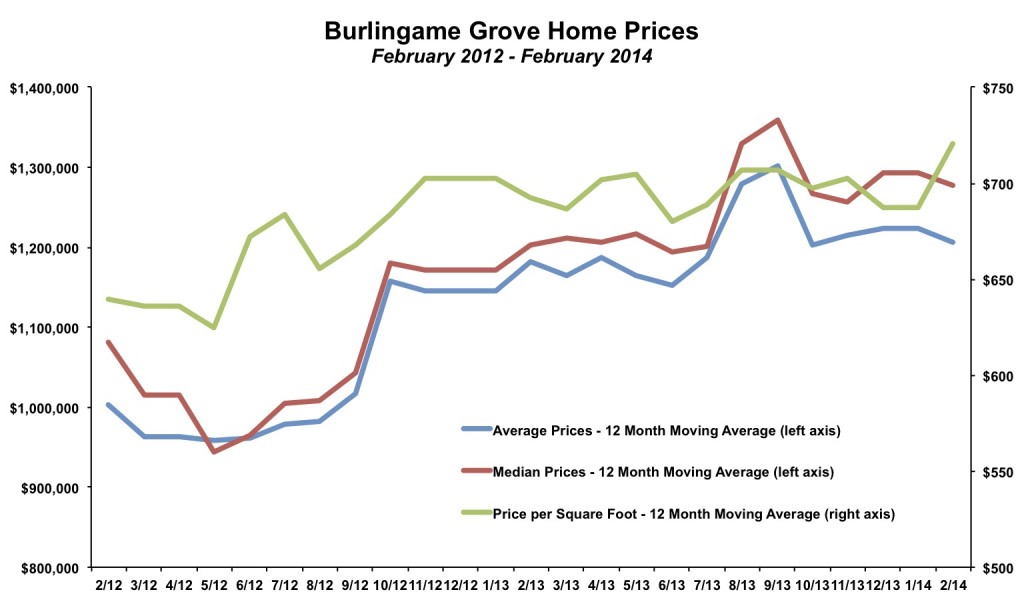 Also, while the data shows the average days on market nearly doubling in 2013, this is a bit of a red herring. There was a single foreclosed home that stayed on the market for over a year, which impacted the average. Most homes sold in less than three weeks.

Thinking of buying or selling a home in Burlingame Grove?