Similar to the single family home market, condos and townhomes are selling quickly in Burlingame through the first seven months of 2013.  Here are some highlights as of July 2013: The condo/townhome market is mirroring the single family market in Burlingame. Prices are rising. The average price per square foot is above $500 this year for the first time since 2008. Many units are the subject of bidding wars. Many (but certainly not all) sellers have been receiving offers that are 5% to 10% above the list price.

Buyers are having to compete because of the lack of supply in the market. At the end of July 2013 there were only five unsold listings. A year prior there were 13 unsold units (which represented a tightened market compared to July 2010 when there were 31 unsold units at the end of the month). With more buyers chasing fewer listings it is no surprise prices are rising.

Also, in this market, buyers know they have to act quick. The average days of market, which was around 60-70 days from 2008 to 2011 fell to 30 days in 2012. It has fallen to just about 21 days in 2013. However, that includes a few listings that sold in the beginning of the year that had been on the market for some time. With much of the older inventory cleared away we are seeing average days on market get closer to two weeks, with a fair number of listings gone in less than ten days. To compete, buyers need to have a plan and be able to act decisively when the right listing appears. 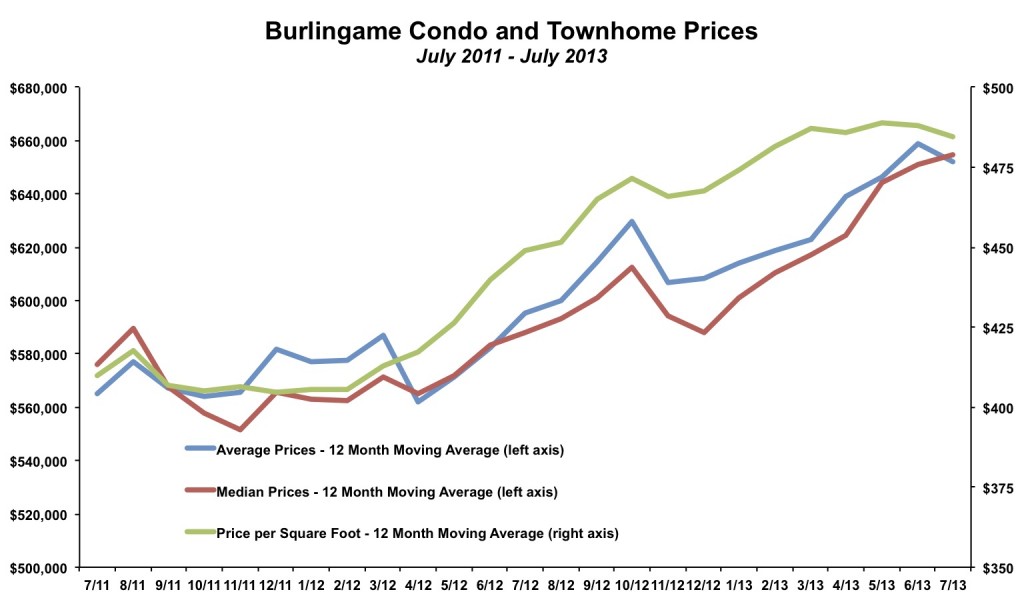 By The Numbers - Downtown Burlingame Real Estate for 2013

Thinking of buying or selling a condo or townhome in Burlingame?