Like other areas of the Peninsula prices are rising in the real estate markets of Aragon, Baywood, and Baywood Knolls. The gain in these neighborhoods has been most noticeable in the past five months, as buyers bid up prices due to a lack of inventory. The average price per square foot from June through October 2013 has been over $750. In the first five months of the year, it was $670. Buyers are having to pay an additional $80 per square foot for the same amount of house.  Here are some highlights for these combined submarkets as of October 2013: The number of sold homes is down in the Aragon/Baywood area in 2013. Through the first ten months of the year, there have been 39 homes sold, with 42 accepted offers (a few listings are still in the escrow process). Last year at this time, 53 homes has already sold and there had been 58 accepted offers. The reason for the decline is solely due to a lack of supply. While sales are down by 14 homes year-over-year, the number of newly listed homes is down by 21. Inventory levels are at record lows.

Prices are rising Aragon/Baywood. The chart below is our standard 12 month moving average, which helps to smooth out random month-to-month fluctuations. By this measure, prices are up about 15% in the past year and close to 25% since reaching bottom about two years ago. However, the recent rapid run-up in prices is not fully accounted for by this view. Average prices per square foot were below $700 every month in 2011, 2012 and all the way through May 2013. Then all of a sudden, buyers began paying a lot more for the same square footage. If this happens in one month or two it can often be due to the type of homes being sold (maybe they are newer, smaller and updated, etc...), but we have seen is that in each of the past five months, the average price per square foot has been above $740. That is quite a jump to go from under $700 to above $740. It suggests that the true increase in prices in the past 12 months may be more on the order of 20%+ versus 15%. Either way, there has been a steep increase in selling values. Buyers looking above 2,000 square feet should be prepared to pay at least $1.5 million in most instances. 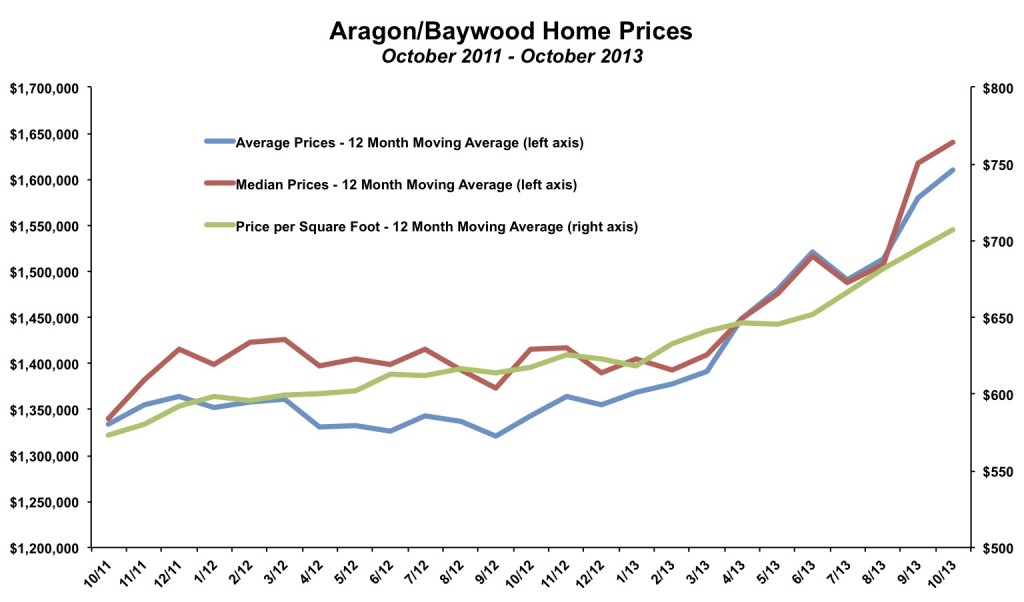 By The Numbers - Aragon/Baywood Real Estate for 2013

Thinking of buying or selling a home in Aragon, Baywood, or Baywood Knolls?