Inventory Remains Low (or Not Existent)

It is a tough market for buyers in the Burlingame neighborhood of Burlingame Village. There were no homes for sale at the end of February 2014. In the past two years, not only has nearly every listed home sold, but most of them have been gone in less than two weeks.

Here are some highlights for the Burlingame Village real estate market as of February 2014:

Buyers have to act quickly if they want to live in Burlingame Village. For starters, it is a relatively small area geographically. It follows that there are not a lot of homes put up for sale. Over the past five years, there has been an average of fewer than 1 listing per month. Those homes that do list often sell quickly. This has been true even longer than the current frenzied market. In 2009 and 2010, when the average sold home in Burlingame had been on the market for over 6 weeks, the average sold home in Burlingame Village was on the market for about 3 weeks.

The chart below shows the 12-month moving average for the median price, average price and average price per square foot in Burlingame Village. It is tricky to track price trends in Burlingame Village. It is such a small neighborhood that changes in price levels are more determined by which homes were recently sold, than whether the price of those homes are rising/falling. The average price per square foot is probably the best measure of underlying prices changes in the area. By this measure, prices have risen sharply over the past year (similar to the rest of Burlingame) and are now at record highs. 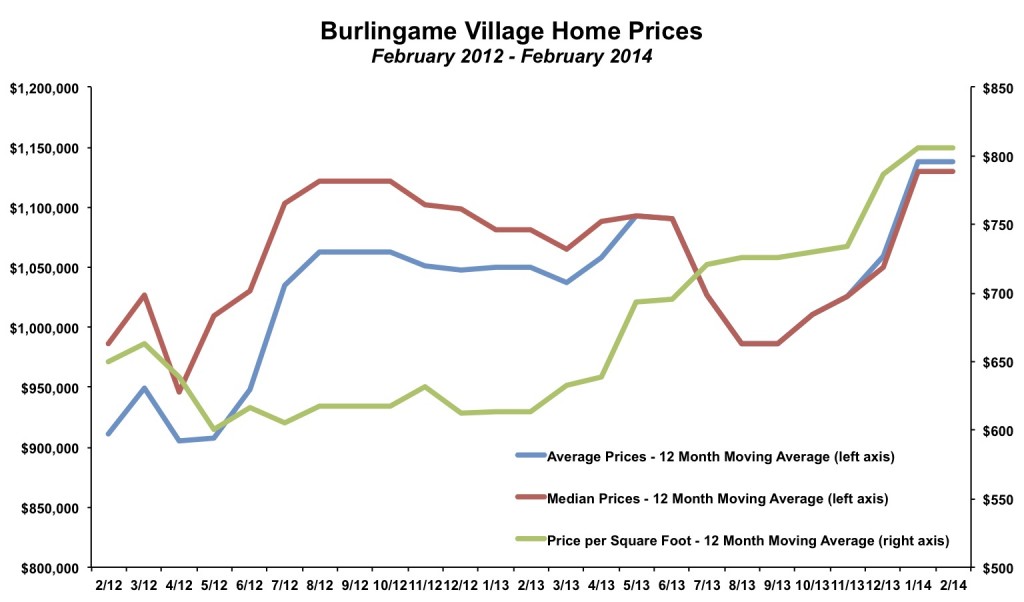