Prices Continue to Rise in Belmont

While prices rose in all areas across the Peninsula in 2013, some of the highest increases based on the data were seen in the Belmont real estate market. The early data from 2014 suggests that prices continue to rise and that bidding wars remain commonplace. Here are some highlights for the Belmont real estate market as of February 2014: Prices rose modestly in 2012 and then have increased sharply since then. In 2013, median prices, average prices and the average price per square foot increased around 20%. Prices continued to rise in early 2014. 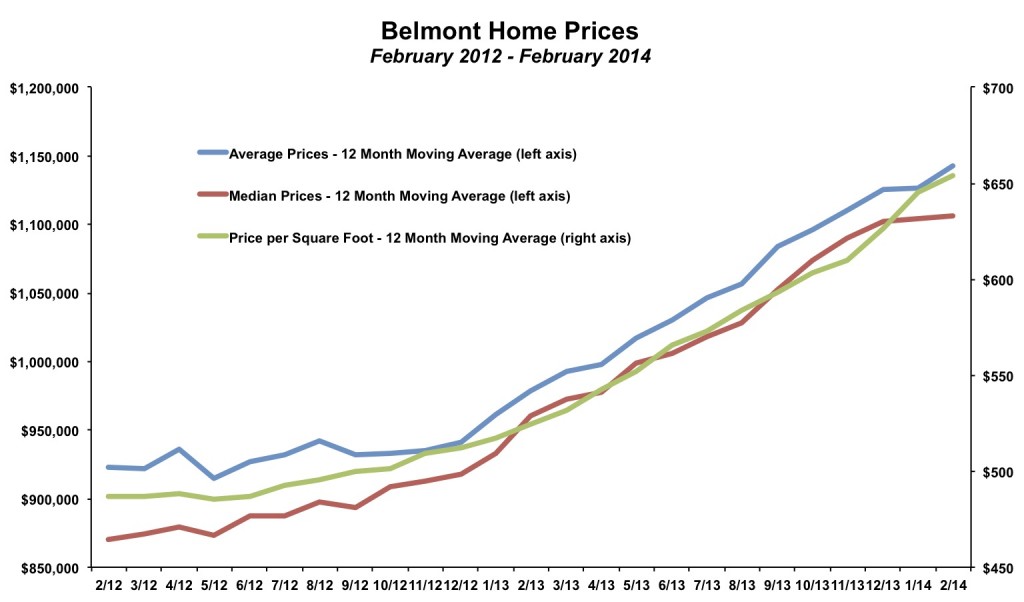 The data suggests that Belmont is seeing more bidding wars than many others of San Mateo County. Across the county, the average single family home sold for 5% above the final asking price in 2013, which is representative of a market favoring sellers. In Belmont, the average home sold for an incredible 9% above the asking price in 2013! The majority of homes are selling for more than the asking price. Even though sellers have raised asking prices based on recent comps the bidding wars continued into 2014. The ratio of sales prices to list prices in 2014 has been 108%.

Home sales increased slightly in 2013 to 263 sales, up from 244 sales in 2012. Impressively, this occurred at the same time that new listings fell from 282 listings to 273 listings. The ratio of sales to listings was 96% in Belmont. This is one of the highest ratios we have seen in any area of the Peninsula that we track. Nearly every home is selling.

Low inventory will likely continue to put upward pressure on prices. Buyers should expect to compete against multiple offers for most listings.

By The Numbers - Belmont Real Estate