Our review of both the submarkets and the entire San Mateo County all suggest that it is still a sellers market in the Peninsula. Here are the highlights for the San Mateo County real estate market as of January 2014 (comparisons are made to data going back to January 2004): Prices have increased by about 20% in the past twelve months in San Mateo County. Since reaching bottom in late 2011/early 2012, prices have risen by more than 30% across the county. In 2013, the median price increased by 24% to just over $1.2 million. The average price rose 24% to $913,000. The average price per square foot rose 20% to $605. The reason that average and median prices rose more than the average price per square foot is because the average home sold in San Mateo County in 2013 was larger than in the previous year. In fact, the average sold home was just over 2,000 square feet, the first time that threshold has been breached in at least 10 years. In the previous ten years the average home size had been in the range of 1,800 square feet to just under 2,000 square feet.

We know from our analysis of many of the local markets that prices are at or have exceeded record levels across San Mateo County. When looking at the county as a whole, prices appear approximately at record levels, having recovered from the downturn a few years ago. 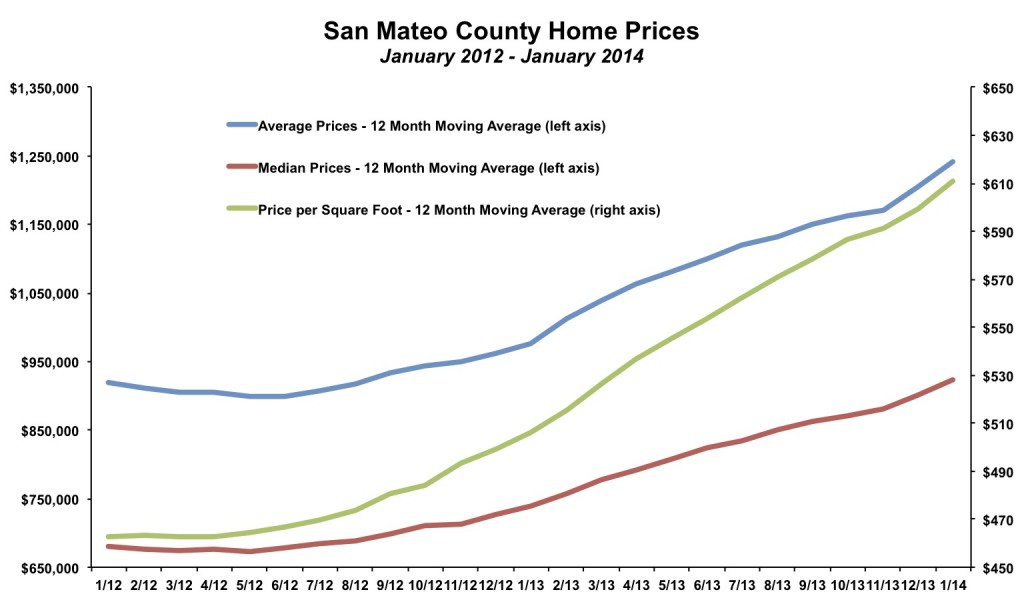 Despite the asking prices being adjusted upwards for new listings based on recent price increases, buyers continue to engage in bidding wars. The ratio of sales price to list price was 103.9% in January 2014. This means that the average sold home went for about 4% above the final asking price (not all homes sold above the asking price, some sold for less and sold for even more than 4% more than asking). A ratio above 100% means that on average buyers are paying more than asking prices. It is a sign that there are more buyers than sellers and that buyers are having to compete against one another. Otherwise, if buyers did not feel like they had lots of competition, they would be more inclined to offer no more than what the seller was asking. The ratio has been above 100% every month since April 2012. As long as the ratio is above comfortably above 100% it is a sign that prices are likely to continue rising, at least in the short-run. 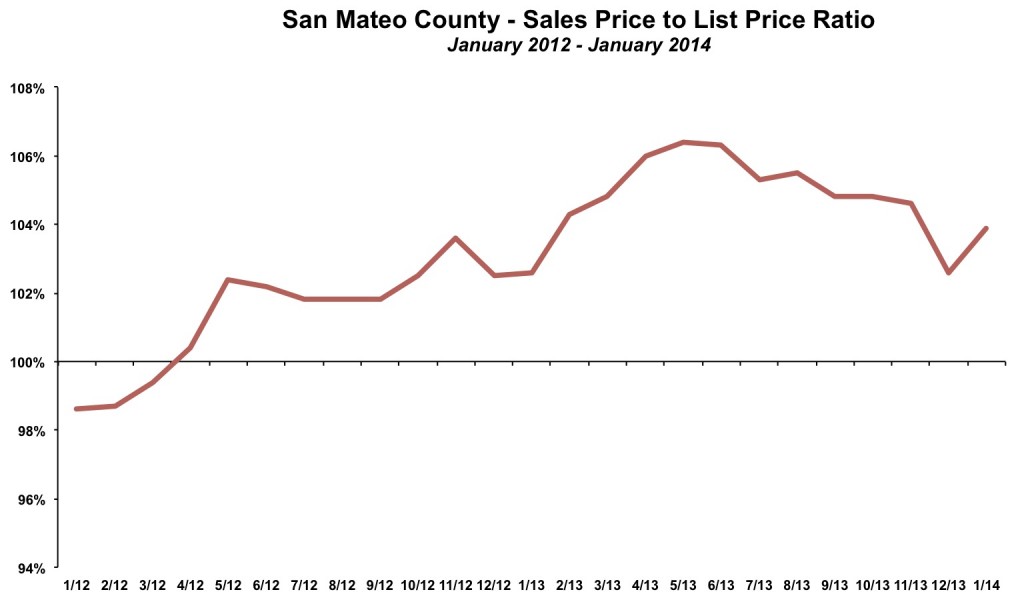 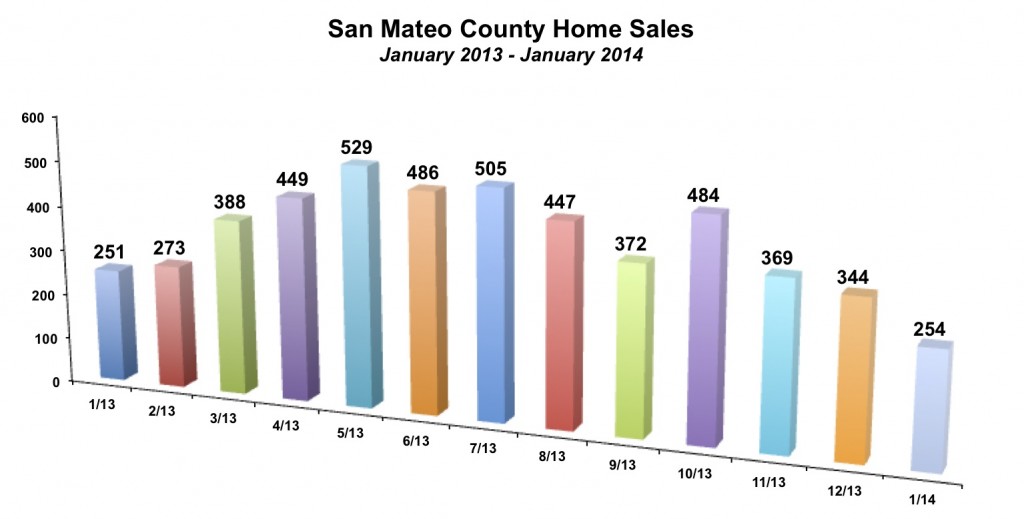 The fact that there were fewer sales in 2013 is a bit of a red herring if people think that it had to do with a lack of demand. Fewer sales were driven by a lack of supply. Consider, 2012 began with an inventory of 1,020 unsold homes. During the year, there were 5,848 new listings. That works out to 6,868 potential sales. With just under 5,200 sales it works out to a 75% sales rate. The rate is never going to be 100%. Some homes are listed near the end of the year and stay on the market in the following year, some sellers pull their listings, etc... 75% is fairly high. It was well below 50% in 2008. 2013 began with much lower inventory. There were around 430 unsold homes to begin the year. There were also fewer new listings as 5,630 properties were listed. This gives 6,062 potential sales. With just under 4,900 sales in 2013 it works out to a nearly 81% sales rate. That is the highest rate in at least 10 years. The moral is that sales activity was held back by a diminished level of inventory and new listings. There were fewer new listings in 2013 than in any of the past ten years. Inventory was lower in 2013 than in any of the past ten years. As we head into 2014, inventory levels at the end of January 2014 stand at around 360 single family homes. This is a very constrained market. Just a few years ago, there was regularly more than 1,500 unsold homes on the market. 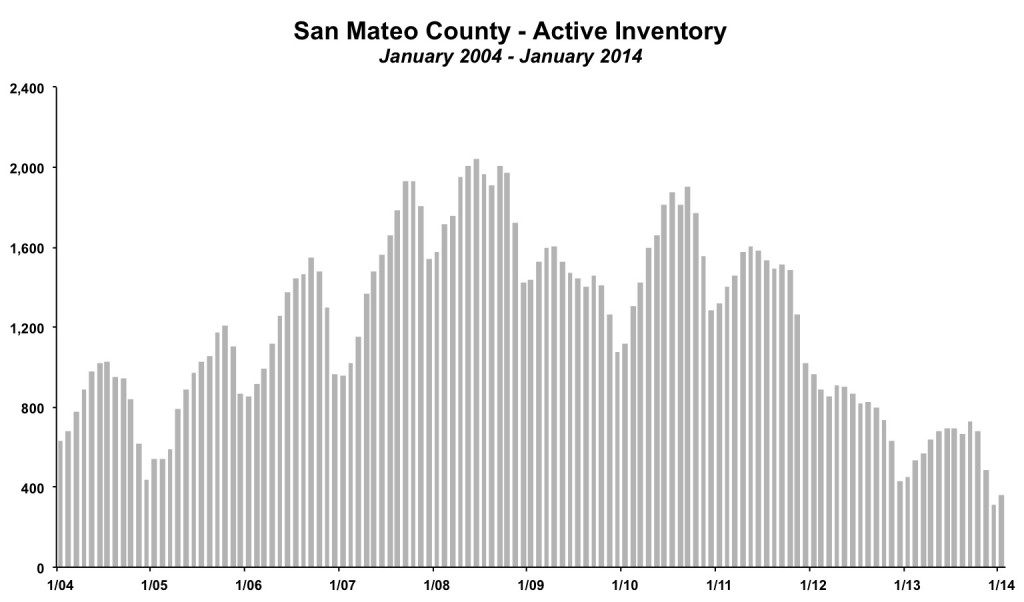