It was another record setting month in the Burlingame real estate market as prices continue to rise to new highs and most homes selling very quickly. Here are the highlights for November 2013 (comparisons are made to data going back to January 2004): The chart below shows the 12 month moving average (to smooth out random month-to-month variation) of the average price, median price and average price per square foot in Burlingame. As of November 2013, all three measures are rising and are at their highest recorded levels. The average price is 9% above the previous high in early 2008, while the median price is 10% above and the average price per square foot is 6% above. The average home in Burlingame would likely sell for greater than $100,000 than it would have at the previous peak in late 2007/early 2008. 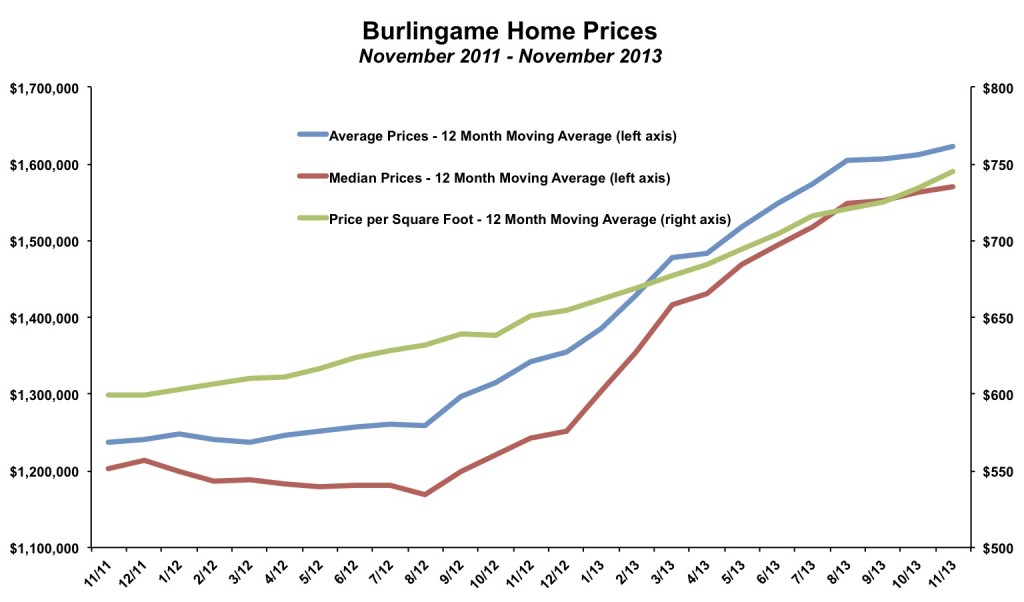 The average home sold for 107.8% in November 2013. While, on average, homes continue to sell for more than their asking, though there is wide variation. In the most recent month, about 1/3 of homes sold for more than 10% above the list price, 1/3 sold for less than the final list price and 1/3 sold for a small amount above asking.

The fact that the average sales price to list price ratio has remained well above 100% is a signal that prices are likely to continue to rise. 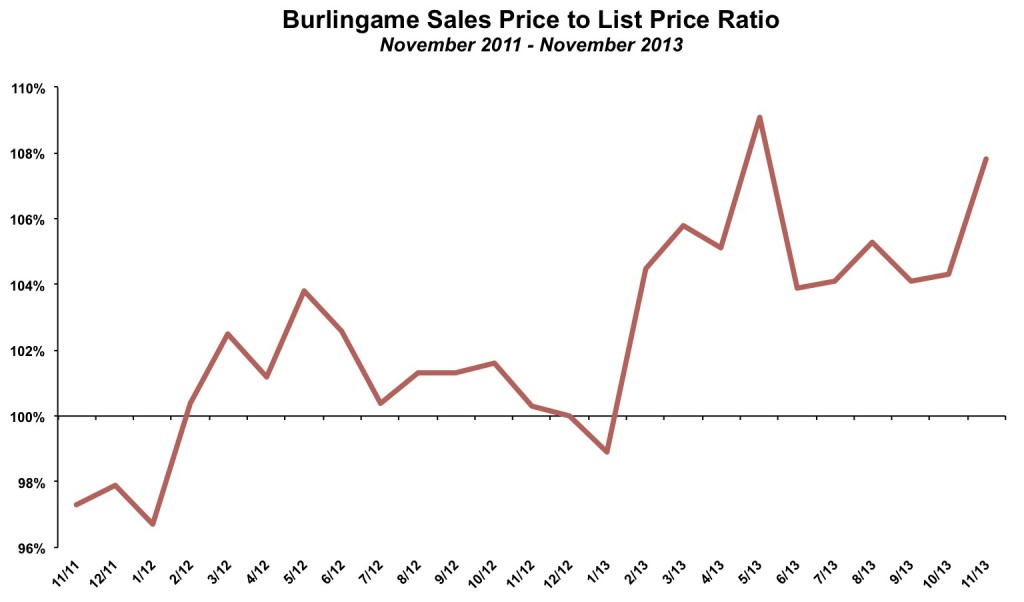 The vast majority of listings are selling and doing so quickly. If there had been more listings, there would likely have been more sales. More simply said, there has been more demand than supply in 2013.

There have been only 268 new listings through November, down 12% from the 303 homes listed in the first eleven months of 2012. It is likely that there will be fewer than 300 new listings in 2013 for the first time in at least a decade.

Relatively few listings combined with modestly high sales activity has resulted in record low inventory levels. At the end of November 2013, there were just 11 homes on the market, as compared to 19 homes for sale at the end of November 2012, and 38 unsold home in November 2011. Going back to the beginning of 2004, current inventory is the lowest both in the absolute number of unsold homes at the end of the month, but also in the ratio of inventory to sales. At the current sales rate, inventory would be depleted in 2 weeks, unless there are new listings. The "normal" ratio of inventory to sales over the past ten years has been around 10 weeks. 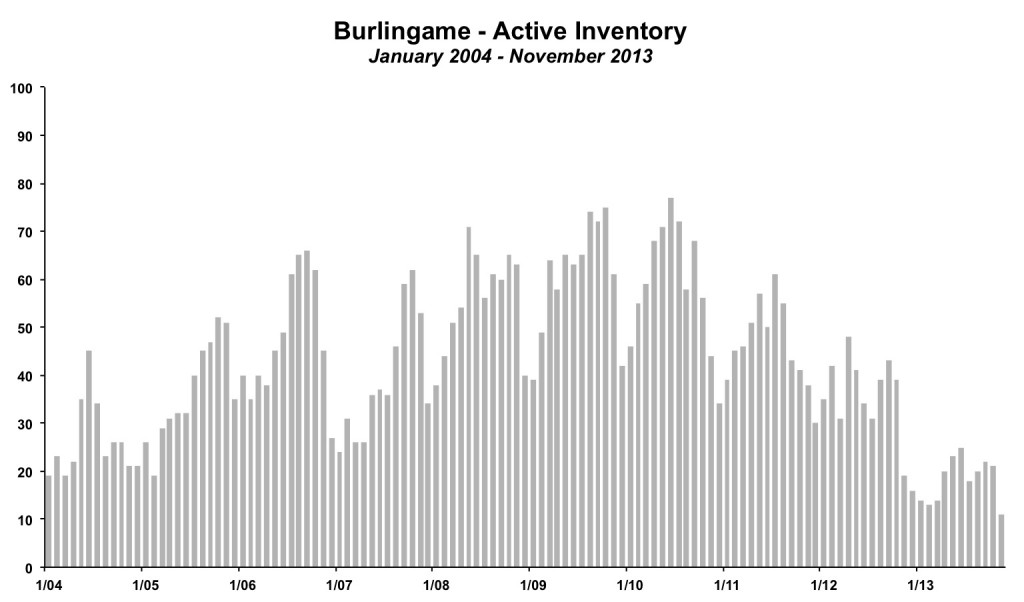 Below is a selection of recent Burlingame real estate sales, sorted by area of Burlingame. These 17 sales provide a good cross section of the local real estate market. Almost all homes continue to sell quickly. Only two of the homes were on the market for more than three weeks.

It is a very difficult market for determining values. About 2/3 of the homes went for at least $80,000 different than the asking price (only one of which went for more than $80,000 below). For buyers, it is tough to know whether a listing is going to go $200,000 over asking or $50,000 under asking. There is a very real possibility of overpaying by $250,000 or on the other hand just missing out on a dream home. A local, knowledgeable Realtor can help with valuations.

Every sold home crossed the $1 million threshold! Usually there are a few older and/or smaller homes that sell for sub $1 million. The 2 bed, 1.5, 790 square foot home on 1517 Chapin would normally have been one of those homes. However, its desirable location in Burlingame Park, near downtown Burlingame, and on the west side of El Camino, along with a woodsy, 7,800 square foot lot meant that the property went way, way over asking. It sold for $1,517,000, which works out to $1,920 per square foot. Likely, the buyers have an eye on tearing down or adding on to the existing bungalow-size house. The per square footage price may be a record for Burlingame. 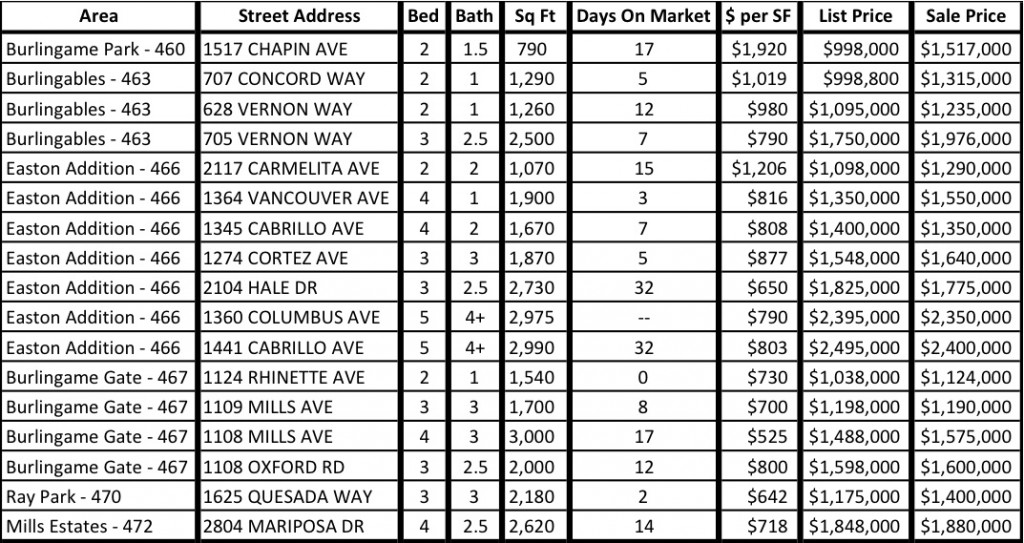