The San Mateo Park real estate market has experienced many of the same trends as the rest of the mid-Peninsula. Prices have risen, buyers are often bidding above asking prices, and inventory levels have dwindled.

Here are some highlights of the San Mateo Park real estate market through the end February 2014:

Some of the summary statistics for the San Mateo Park market though are a bit misleading. For example, the average days on market in 2013 was 36 days, compared to 22 days in 2012. The reason for the jump is due solely to a few homes that were on the market for over 90 days. Most homes are selling and most homes are selling quickly. Buyers should expect listings that have strong general appeal with reasonable asking prices to be sold in less than two weeks, and usually with multiple offers culminating in a selling price above the list price.

Similarly, the trend for home prices at first glance appears a little confusing. The graph below shows the 12 month moving average for median prices, average prices and average price per square foot in San Mateo Park. The data shows median prices and average prices peaking in late 2012, falling until mid-2013, and then rising rapidly again. While the calculations are correct (we double checked), the conclusion is not. A lot of the movement was due to the type of homes that were being listed and selling, not actual changes in prices. What happened is that the type of homes that were coming onto the market in early and mid 2012 were around 2,800 square feet. This is typical for the San Mateo Park market. At that time, underlying prices had just started to rise in the area and most of the Peninsula. At the end of 2012 and into mid-2013, the type of homes that sold were on average under 2,300 square feet. These are normal random fluctuations, but had the effect of masking the rise in prices. Then in late 2013 and into early 2014, the average sold home was over 3,000 square feet. This whipsaw change in the size of homes being listed and sold gave the up-and-down impact to prices. 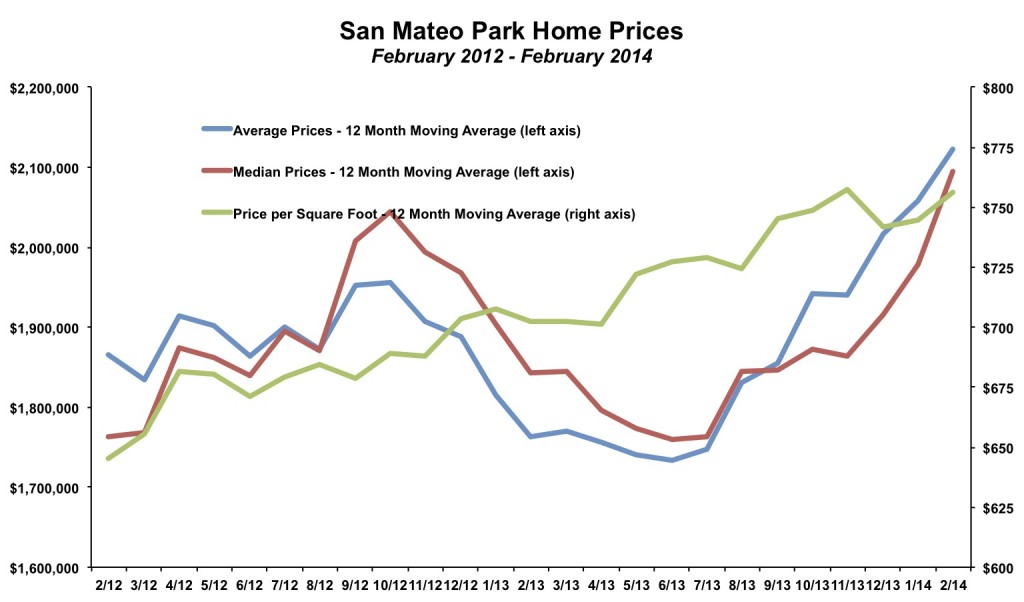