Here are some highlights for the San Mateo Park real estate market as of October 2013: Some of the summary statistics are a bit misleading in the San Mateo Park real estate market. For example, the average days on market in 2013 has been 39 days, compared to 22 days in 2012. The reason for the jump is due solely to a few homes that were on the market for over 90 days. Most homes are selling and most homes are selling quickly, in less than a few weeks. In the past four months, there have been 13 homes sold. These 13 homes spent less than an average of 14 days for sale before accepting an offer.

The graph below shows the 12 month moving average for median prices, average prices and average price per square foot in San Mateo Park. The data shows median prices and average prices peaking in late 2012, falling until recently, and then rising again. While the calculations are correct (we doublechecked), the conclusion is not. A lot of the movement was due to the type of homes that were being listed and selling, not actual changes in prices. In the first nine months of 2012, the average home sold was nearly 3,000 square feet. In the following nine months, it was around 2,300 square feet. In the most recent few months, the average size of a home sold has been closer to 3,300 square feet. As a general guide, over the past five years, the average home sold in San Mateo Park has been about 2,800 square feet. Once we re-interpret the data through that lens, we can see that the average/median prices were influenced by larger homes selling in most of 2012, smaller homes selling in late 2012 and early 2013, and larger homes once again in later 2013. The truer picture emerges when looking at the average price per square foot. This figure suggests a steady increase over the past two years, including a 9% jump in the past 12 months. While the headline prices are fluctuating, the reality is that similar to other areas of the Peninsula, buyers in the San Mateo Park real estate marketplace are paying more for the same amount of house. 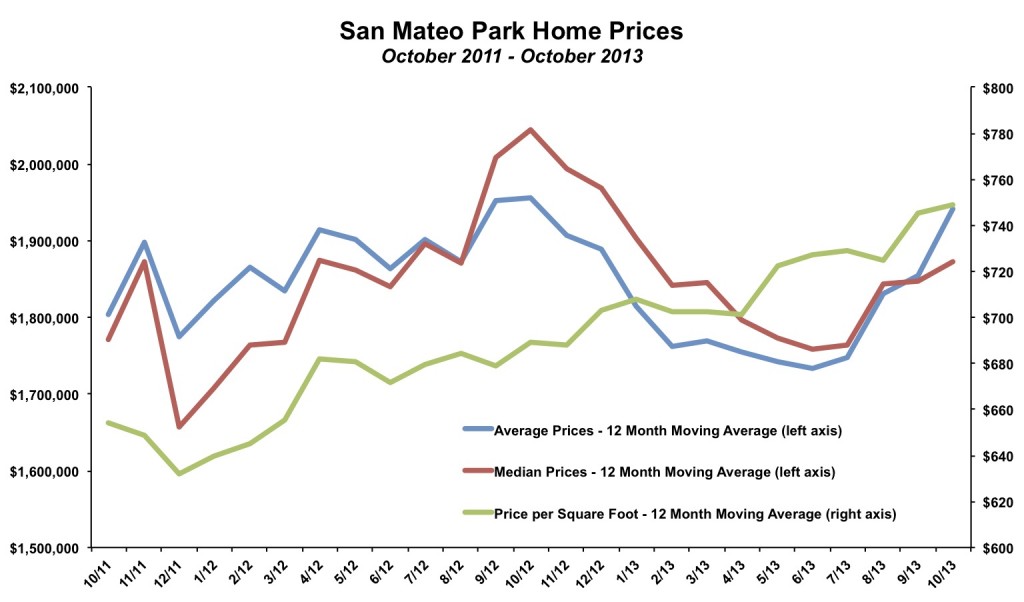 By The Numbers - San Mateo Park Real Estate for 2013