$1 Million+ Now the "Norm" in Millbrae

Like most areas of the Peninsula, prices are rising in the Millbrae real estate market. Buyers are bidding above asking prices and most homes are selling quickly. Here are some highlights for the Millbrae real estate market as of September 2013: Prices have increased by around 20% in the past twelve months in Millbrae. Since reaching bottom in late 2011/early 2012, prices are up 25%. Buyers that were looking at the Millbrae market in late 2012 should have expected to pay close to $1 million an average home in the area. Buyers today should expect to pay closer to $1.2 million. 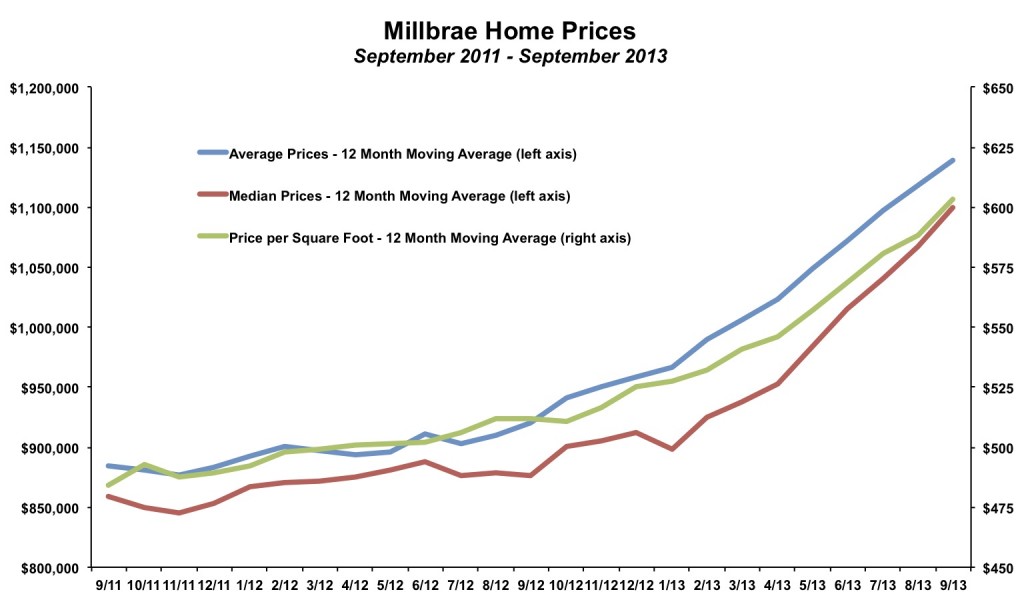 The result has been buyers bidding against each other. We can see this trend in the data not only from my experience, but by looking at the average sales price to list price ratio. While not a perfect measure because it can be impacted by sellers removing their listing or changing their asking price, it gives an idea of how "hot" the market is. It varies by geography, but a normal rate in Millbrae for a market that favors neither buyers nor sellers is right around 100%, perhaps 99%. In Millbrae, the ratio has been 108% in 2013. On the face of it, it seems easy (if expensive) for buyers. If a home is listed for $1 million, add 8% and offer $1,080,000. In reality, it is much more difficult. Not all homes are selling for 8% above asking. Some are selling for 10% or 20% above asking. Others are selling at or below the asking price. Part of the reason for the big swing is that some sellers are pricing based on past comps and hoping/expecting to attract buyers that will bid above the asking price. Other sellers are pricing ahead of past comps based on where they think the market has risen.

Buyers can benefit by working with a knowledgeable Realtor who has a good idea of which home is likely to go 20% over asking versus that which is likely to go at the listed price. It is never an exact science, but it can diminish the likelihood of overpaying by tens or hundreds of thousands of dollars or missing out on your dream home.

By The Numbers - Millbrae Real Estate for 2013

Thinking of buying or selling a home in Millbrae?

If you're interested in learning more about the Millbrae real estate market, considering selling your home in Millbrae, or thinking about moving to Millbrae, please drop me a line and I'd love to connect with you.