Similar to other areas of the Peninsula, prices continue to rise in the Foster City real estate market. Recent sales suggest that prices are at all-time highs in the area.

Here are some highlights for the Foster City real estate market as of March 2014 (everything is compared to data going back to the mid 2000s).

The chart below shows the 12 month moving average (to smooth out month-to-month fluctuations) in the average price, median price and average price per square foot. Prices have been rising since mid-2012. Given the recent sustained price increases, the levels shown in the chart for March 2014 are a bit understated. While yes, the average price per square foot over the past year has been about $590, it has been above $610 in each of the past four months, including $644 in March 2014. 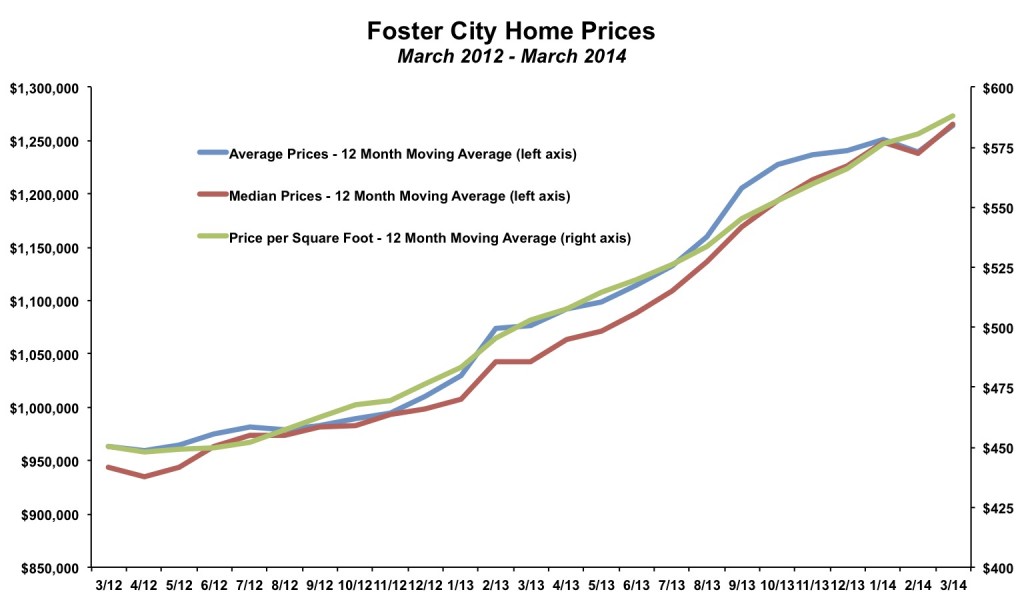 Prices have increased a little less than 20% over the past 12 months. Since reaching bottom in mid 2012, prices are up more than 30%.

There seems to be a pool of buyers eagerly bidding on almost every listings coming onto the market in Foster City. Over the past two years, more than 90% of listings are selling (and in the 10% of instances where there is no sale, many times it is because the seller had a change of plans). Most listings are selling quickly. The average days on market in March 2014 was just 9 days. Most homes are selling within two weeks. The winning bid is regularly well above the asking price.

This puts pressure on potential buyers who have to act quickly when a new listing appears. There is often only a few days after seeing a home to decide whether to make an offer. Some homes are going for 20% above the asking price (and a handful are selling for less than asking). In a market where average prices are over $1 million, this represents a swing of more than a quarter million dollars.