Coxhead House - A Bit of English Charm in the Golden State 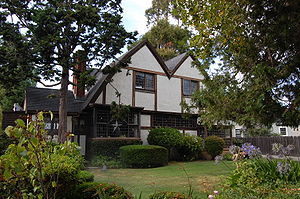 During the gold rush of 1891, San Francisco was in great turmoil and rapidly changing. While money poured into the city, Ernest A Coxhead, a noted English architect, decided to build his family’s country retreat in San Mateo, which he nicknamed “Scholar’s Cottage.” Along with his colleagues Julia Morgan and Bernard Maybeck, he influenced the new Arts & Crafts techniques and innovations used in English country homes. This Tudor Revival home has survived, almost untouched, for over a century.

Pat Osborn & Steve Cabrera purchased the home in 1991 and began to update it, starting with the kitchen and electrical system. While sharing its rich history with friends, the idea for the Bed & Breakfast was born. In 1996, Martin Dreiling, a historically sensitive architect, and Stanley Acton, a dedicated contractor, began the transformation.

Being careful to stay true to the original designs, they sustained most of the house as is. The brick from a crumbling fireplace was used to pave the courtyard floor and the copper shower pans were converted by Steve into the Olde English Coxhead sign that hangs out front. Many of the artifacts found within the walls during the renovation can be viewed on display in the entry.

The first three bedrooms, Ernest Coxhead Room, Julia Morgan Room, and Bernard Maybeck Room were named in honor of all three architects. The Wyntoon illustration and angel frieze were hand-painted as tributes to Morgan. The Palace of Fine Arts mural honors Maybeck. Later, the Angel Porch Room with its sculpture, and the Sixpence were named.