Prices continue to rise in the Burlingame real estate market. Although it has long been a million dollar market where the average and median sales prices is above $1 million, it is rapidly becoming a million dollar only market. Sub $1 million sales of single family homes are becoming very rare in the city. With most sales at $800 per square foot and above, even 2 bed, 1 bath 1,200 square foot homes are going for above $1 million (especially if the property has a potential for additions). I just sold a two bedroom at 725 Plymouth Way in Burlingables for $1,410,000, and another two bedroom at 221 Stanley in Lyon Hoag for $1,303,000.

Here are the highlights for March 2014 (comparisons are made to data going back to January 2004):

The chart below shows the 12 month moving average (to smooth out random month-to-month variation) of the average price, median price and average price per square foot in Burlingame. On a year-over-year basis, prices have increased by around 15%. Since reaching bottom in the middle of 2011, prices have risen by 30% to 35%. 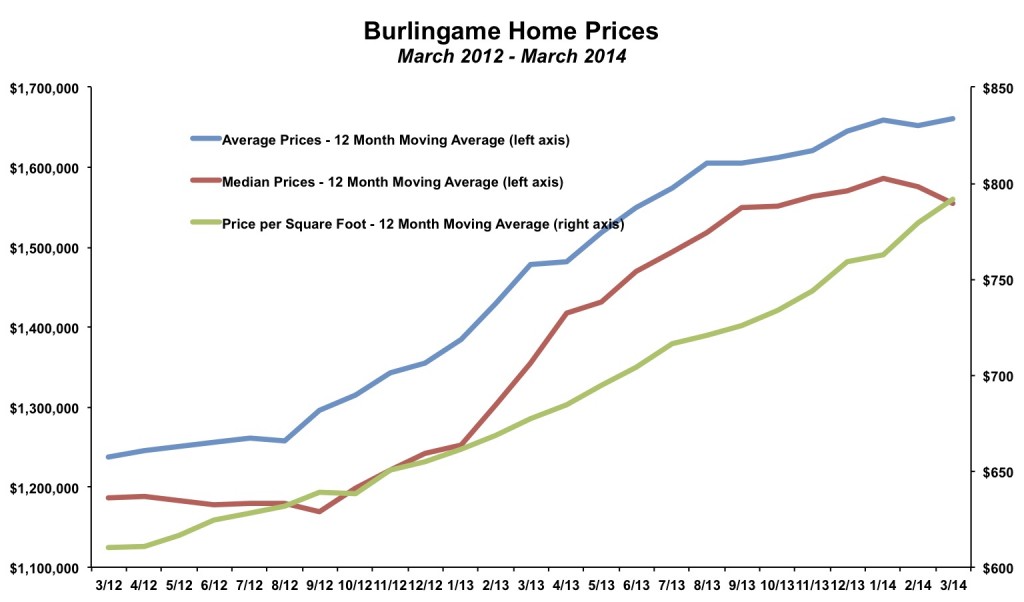 In nominal terms, prices reached a new record level in the middle of 2013, surpassing the previous high in late 2007/early 2008. However, due to general underlying inflation, the value of a dollar has eroded during that time. Once you adjusted for inflation, "real" prices were still not at their previous. The continued increases in prices since the middle of 2013 now means that after adjusting for inflation, prices have now matched, if not surpassed their previous high in late 2007/early 2008.

The ratio of sales price to list price is one indicator of market demand. In most areas, when the ratio is greater than 100% it is a sign that there are bidding wars and prices are rising. When the ratio is below 100%, sellers are having to cut prices to make the sale. The ratio went below 100% in January, which served as a warning flag that buyer demand may have been flagging. It increased in February and then again in March when the ratio was 105.1%. Despite sellers increasing their list prices based on recent price increases, buyers continue to bid above asking. 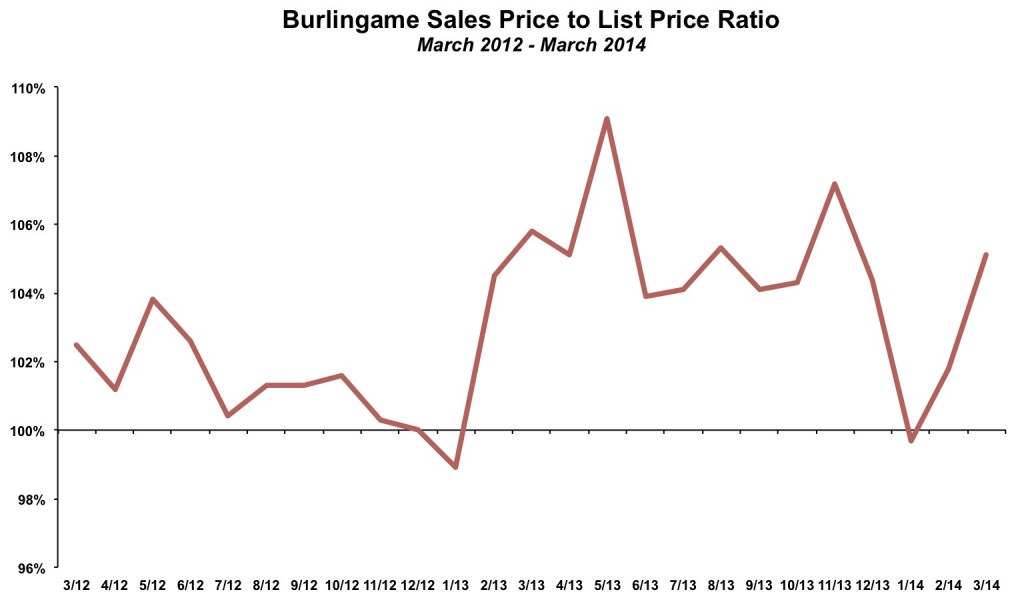 Sales Pick Up in March, but Remain Low

Matching the normal seasonal pattern, sales increased in March with 18 homes sold up from just 7 sales in February. Still, sales remain low. There have been just 30 homes sold to start the year, as compared to 44 homes in the first three months of 2013. It is the fewest sales since 2009, when just 23 homes were sold in the first quarter of the year. 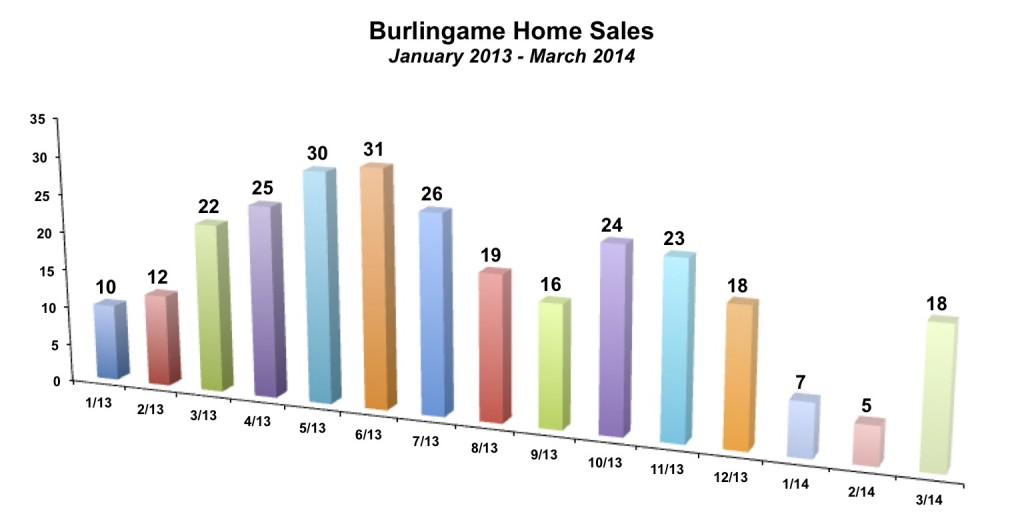 Sales have been hampered by a lack of inventory. Remember, 2013 ended with just 5 unsold homes, a record low level in Burlingame! It was the first time in at least 10 years that there were fewer than 10 homes for sale at the end of a month. Inventory levels have since increased to 18 unsold homes at the end of March 2014. This still remains historically low inventory for the Burlingame market. 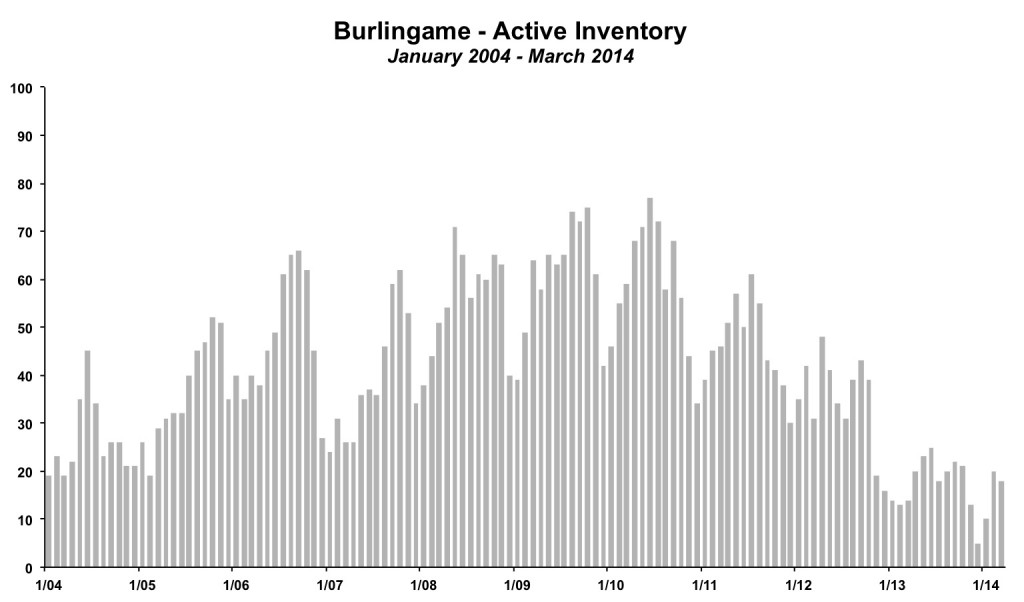 Below is a selection of recent Burlingame real estate sales, sorted by area of Burlingame. As mentioned in previous months, the sub $1 million single family home sales is becoming increasingly rare in Burlingame. While that trend continued in the recent months, perhaps more impressively, none of the sold homes even listed for less than $1 million. There were two 2 bed 1 bath homes. In the recent past these homes regularly sold for less than $1 million. However, given the recent run-up in prices, sellers asked for over $1.1 million in both cases. The homes ended up selling for $1.3 million (221 Stanley Road) and $1.4 million (725 Plymouth Way).