Similar to other areas of the Peninsula, prices continue to rise in the Foster City real estate market. Recent sales suggest that prices are at all-time highs in the area (perhaps 15% above the previous peak in late 2007/early 2008).

Here are some highlights for the Foster City real estate market through July 2014:

The chart below shows the 12 month moving average (to smooth out month-to-month fluctuations) in the average price, median price and average price per square foot. Similar to other areas of the mid-Peninsula, prices have increased by 20% in Foster City in the past 12 months. Since reaching a bottom in late 2011, prices have risen by 40%. 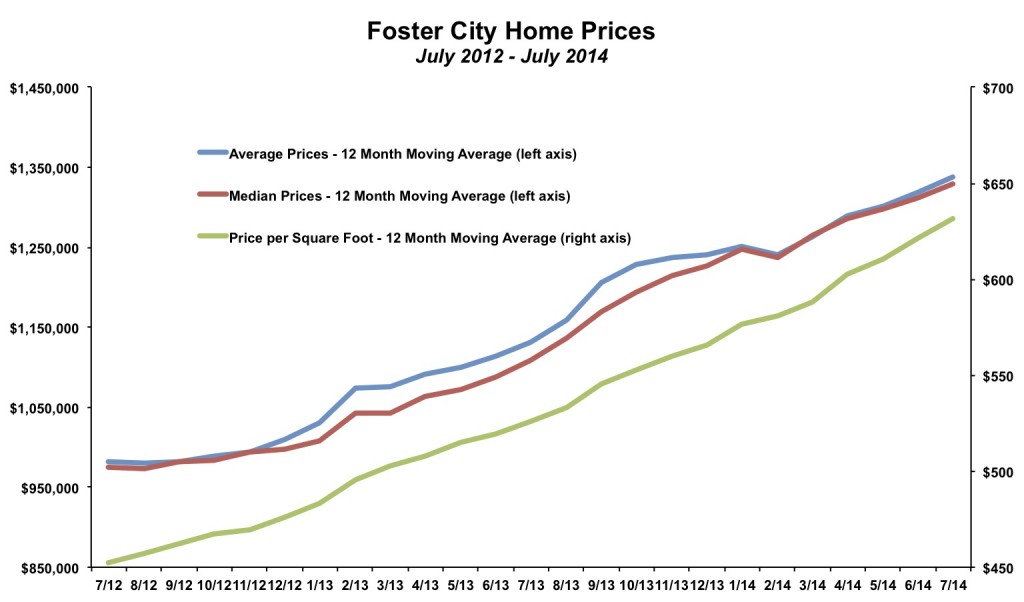 The number of homes sold in Foster City is down in 2014 as compared to 2013. There have been 58 homes sold through July 2014. At the same point last year, 72 homes had been sold. At first, this seems counterintuitive. Given that most listings today have multiple offers it seems that there should be more sales. The reason for fewer sales is that there have been fewer homes for sale. The number of new listings is down by 11 and there was one fewer home for sale to start the year than last year. Tallying that up. Sales are down by 14, but potential sales are down by 12, so in the end, the situation is about the same as last year. Almost all listed homes are selling. Most are selling quickly (two weeks or less) and for much more than the list price (about 10% higher year-to-date). Inventory levels remain low. There were just 8 unsold homes on the market as of the end of July 2014. Given the normal ebb and flow of new listings, inventory levels during the summer time cannot really get any lower. Low inventory is likely to continue to put pressure on buyers who are competing against each other over the same listings. This in turn has pushed prices up and unless the underlying situation changes, will continue to push prices up.