Prices continue to rise in the Belmont real estate market as buyers regularly bid 5%, 10% or even more above asking prices. Here are some highlights for the Belmont real estate market through July 2014: Similar to other areas along the Peninsula, prices have risen close to 20% in the past 12 months in Belmont. Since reaching bottom in mid-2011, prices have increased by more than 40% and are at record levels. The average sale in Belmont in 2014 has been an 1,850 square foot home that was listed at just under $1.2 million and sold for just over $1.3 million. Two years ago, the average sale was an 1,850 square foot home that was listed for about $930,000 and sold for $950,000. 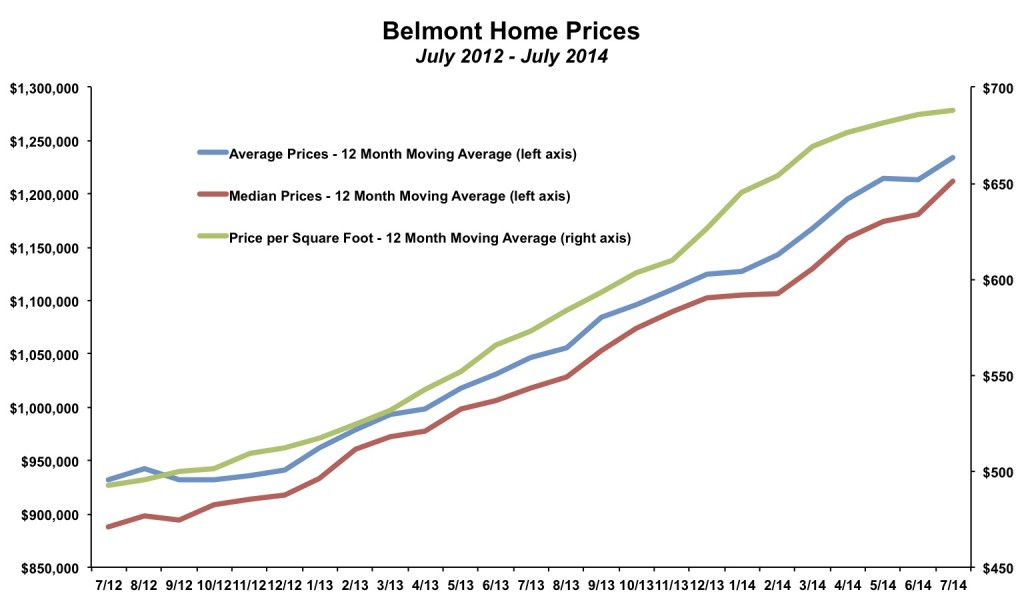 Home sales jumped sharply in Belmont from 2011 to 2013 and inventory levels dropped. So far in 2014, inventory levels remain at historic lows. There were just 19 unsold homes in Belmont as of the end of July 2014. Inventory levels have pretty much bottomed out. There will always be some inventory at a given point in time because of newly listed homes that have not sold yet. Low inventory and fewer new listings has depressed the number of homes sold in the area. Through the first seven months of 2014, 125 homes sold. In the same period in 2013, there were 149 sales. Nearly every home is selling...there just are not as many home for sale.

A lack of inventory will likely continue to put upward pressure on prices. Buyers should expect to compete against multiple offers for most listings. Most sellers are expecting to receive offers above their asking price (versus hoping/wishing as in normal real estate market periods).

By The Numbers - Belmont Real Estate