In what is probably beginning to sound like a broken record to anyone reading these reports, the Burlingame real estate market continues to favor sellers. Prices are at record levels and rising, inventory is near record lows (thought still many great homes out there for buyers), and most homes continue to sell quickly. Here are the highlights for October 2013 (comparisons are made to data going back to January 2004): The chart below shows the 12 month moving average (to smooth out random month-to-month variation) of the average price, median price and average price per square foot in Burlingame. As of October 2013, all three measures are showing their highest recordings ever. The average price is 8% above the previous high in early 2008, while the median price is 10% above and the average price per square foot is 4% above. 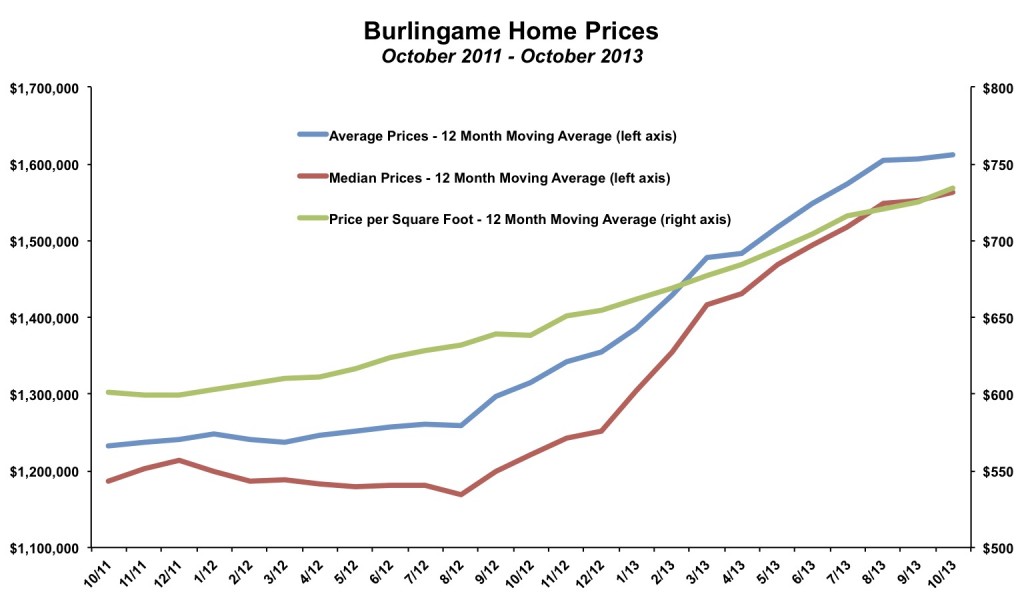 On a year-over-year basis, prices have increased by 15% to 20%. Since reaching bottom in the middle of 2011, prices have risen by approximately 25%.

Prices cannot rise 15% year-after-year forever (assuming general inflation remains in the low single digits), even if every company in the Bay Area IPOs successfully. How long can prices continue to rise? The honest answer is that no one truly knows. Just because there has been a run-up for the past 18 to 24 months does not mean that the market has run out of steam. If history is any guide, steady price increases can be sustained for much long than two years. From the mid 90s to the mid 2000's prices rose every year in California. The same thing occurred in the greater Bay Area, with the exception of a few down years in the 2001 tech crash.

On average, homes continue to sell for more than their asking, though many homes are going at or even below the final list price as sellers price based on rising comps. (See our review of recent home sales for more detail).

The average sales price to list price ratio has been above 100% almost since the beginning of 2012. The ratio is often a leading indicator. When it rises and stays above 100% it signals rising prices, and vice versa when it falls it can signal flat to declining prices. The indicator remains at an elevated level, suggesting further price increases. We will watch it closely. 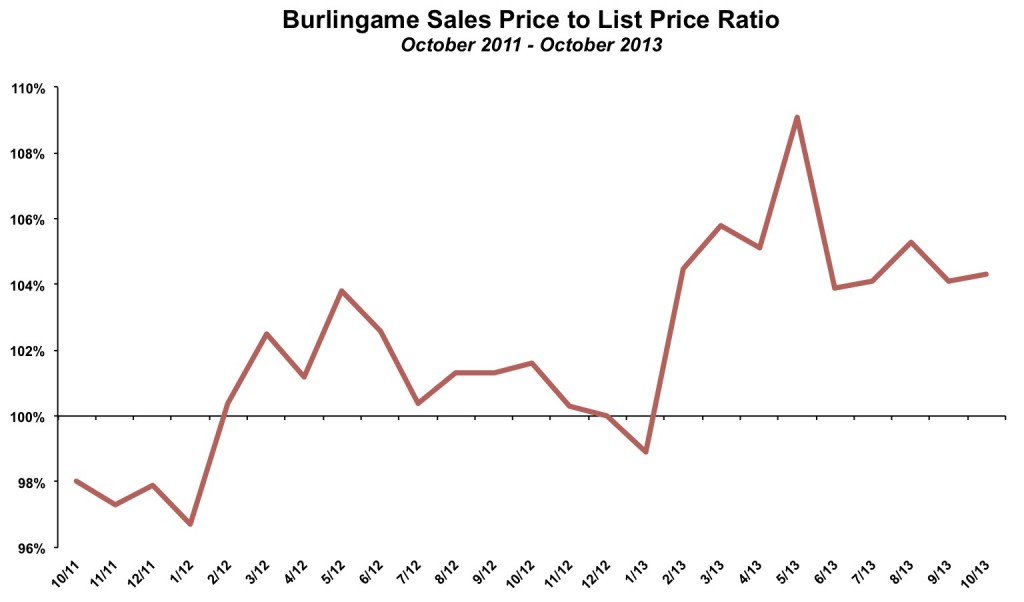 However, that being said, there is a perception out there that there are so few places for sale; while there are fewer homes to choose from at any given moment given low average days on market, the fact that only a slightly lower number of buyers are still being successful buying homes is still a very encouraging sign. The "no inventory" concept does not carry much weight in the sense that homes are just selling faster, so buyers do not have as much time to see the home, but there is still the same opportunity. 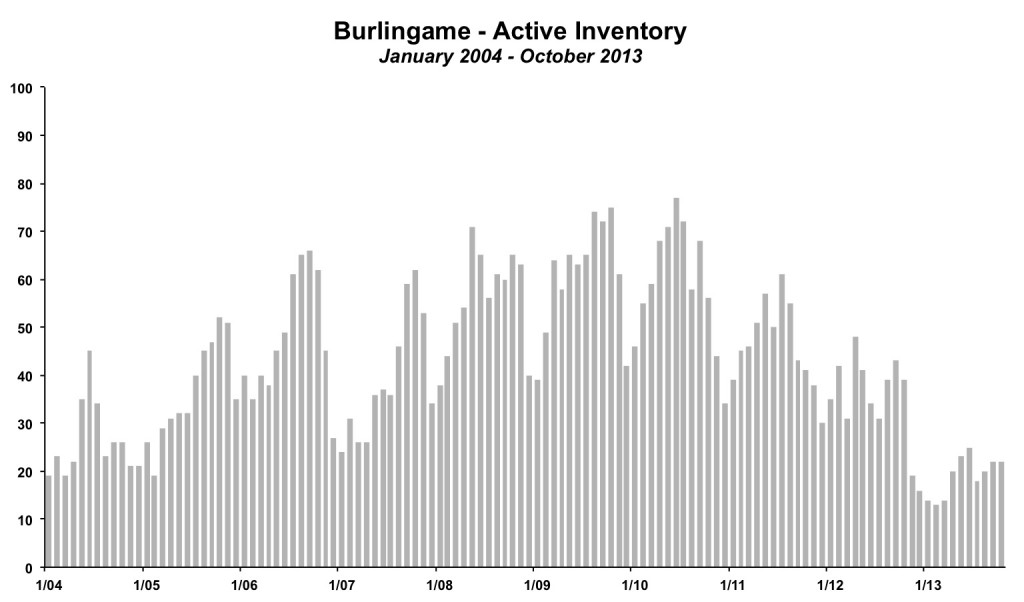 Below is a selection of recent Burlingame real estate sales, sorted by area of Burlingame. These 20 sales provide a good cross section of the local real estate market. Most homes continue to sell quickly. Only four of the homes were on the market for more than two weeks. However, we are not seeing as many homes sell immediately. Only five homes sold in less than a week.

All but four of the homes sold for more than $1.2 million. Sub $1 million sales are becoming increasingly rare in Burlingame. Two of the sub $1 million sales were smaller homes. The 3 bed home on Channing in Lyon Hoag sold for $897,000, about even with the list price. It had previously sold in April 2005 for $835,000. The 4 bed, 2 bath on Morrell in Burlingame Gardens was a trust sale and in need of updating. 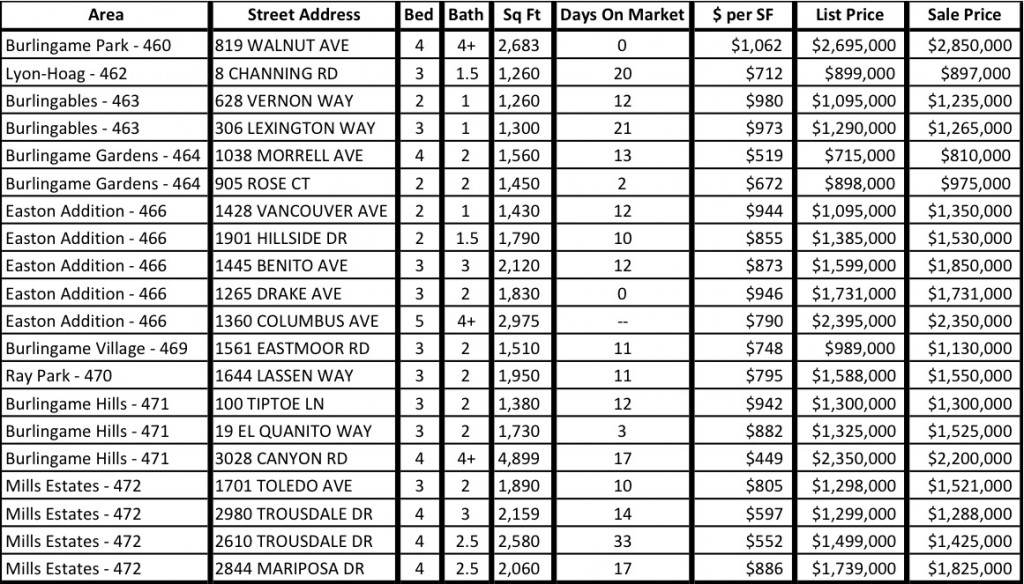