Many listings are selling quickly in the Burlingame Park real estate market, where it is not uncommon for a home to sell after a single open house. Prices have risen sharply as well with buyers regularly paying above $800 per square foot and in a few cases going over $1,000 per square foot. Here are some highlights in this submarket as of April 2014: While they are becoming more common, sales above the $1,000 per square foot level in Burlingame still elicit a "did you hear about that home?" chatter. There were just 10 such single family sales in 2013, but will likely be at least 40 in 2014. There were two recent homes that sold in Burlingame Park that crossed the $1,000 threshold. At 770 Walnut Avenue, a 3 bed, 2 bath, 2,000 square foot craftsman sold for $1,028 per square foot. The selling price of $2,055,000 was more than $400,000 above the $1.6 million asking price. At 1601 Sanchez Avenue, a 2 bed, 1 bath, 1,450 square foot bungalow sold for $1,097 per square foot. The selling price of $1,590,000 was nearly $300,000 above the the approximately $1.3 million asking price. Both homes sold in less than two weeks. What do these two homes have in common, other than the fact they sold for more than $1,000 per square foot and are located in Burlingame Park? Both have relatively large lots given the home size. The craftsman on Walnut Avenue is located on a 9,000+ square foot lot and the bungalow is located on a 7,000+ square foot lot. (The median lot size among single family homes sold in 2013 in Burlingame was 6,000 square feet. Half of all homes were situated on lots of 6,000 square feet or less). Buyers are attracted to large lots because they are doing the calculation comparing buying a bigger home or buying a smaller/older home and renovating/adding-on. Given that construction costs have not risen at the same rate as home prices, it can make financial sense to buy small and add-on, as opposed to buying big and keeping as is. One important read-through for buyers and sellers is that it is increasingly important to take into account lot size when judging comparables.

Prices appear to have risen by 20%+ in the past twelve months in Burlingame Park. The average price per square foot in 2014 has been $906, which is 24% above the level seen in the first four months of 2013.

The chart below shows the 12 month moving average values for the median price, average price and average price per square foot. It appears that the median price and average price have fallen in the past few months. This is statistically true, but misleading. There have been a handful of smaller homes sold in the past few months that have brought down the moving averages. However, prices are rising as evidenced by the continued ascent in average price per square foot. This is all part of normal random fluctuations that appear when looking at a single submarket, but something that prospective buyers may not be aware of if they are only looking at the headline data. 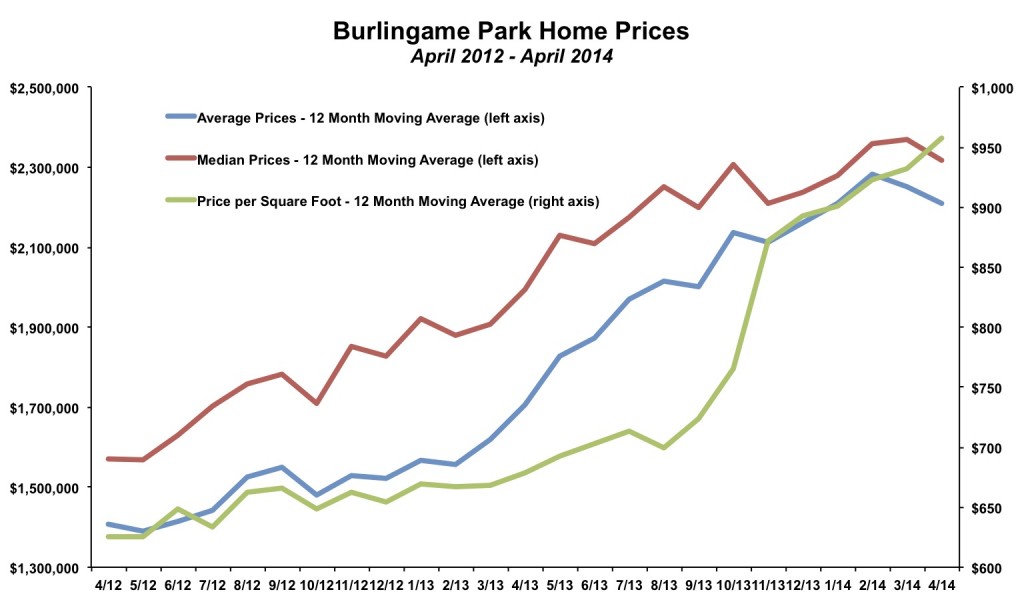 Thinking of buying or selling a home in Burlingame Park?