Despite a recent rise in mortgage rates it remains a great time to be a seller in Burlingame. Prices are at record levels and rising, inventory is at record lows, and most homes continue to sell quickly. Buyers can take some solace in that while the average home is still going for well above asking, there seem to be a few more homes staying on the market for an extra week and selling closer to the list price. Here are the highlights for August 2013 (comparisons are made to data going back to January 2004): The chart below shows the 12 month moving average (to smooth out random month-to-month variation) of the average price, median price and average price per square foot in Burlingame. As of August 2013, all three measures are showing their highest recordings ever, and the most recent sales data suggests that they will continue rising. 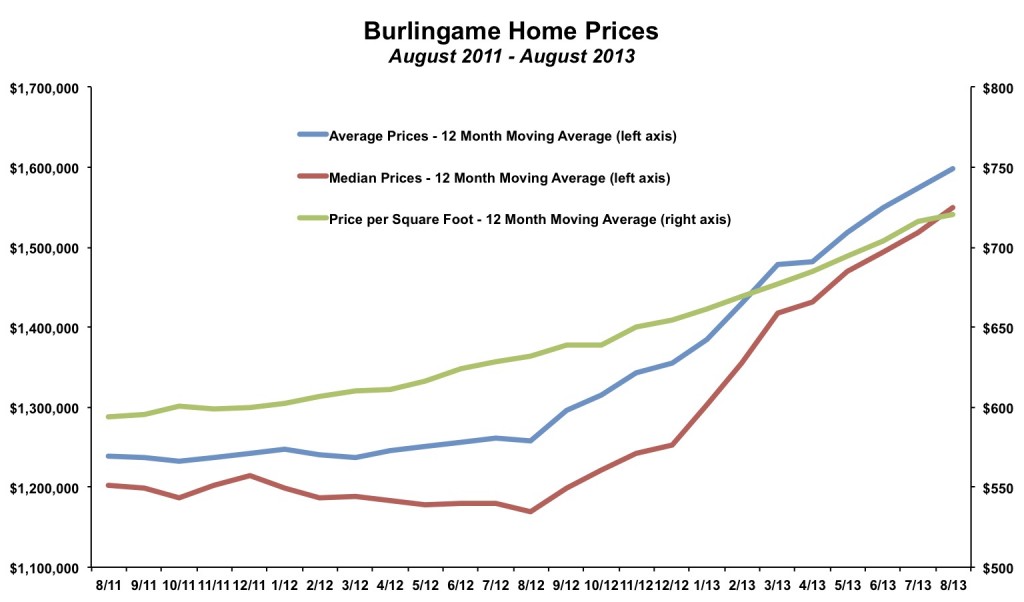 On a year-over-year basis, prices have increased by 15% to 20% Since reaching bottom in the middle of 2011, prices have risen more than 20%.

Despite some fears that rising mortgage rates might lead to a pullback in the market, we continue to see many (but not all) homes still selling for more than their asking price, even with asking prices that are set based on recent comps. The average sales price to list price ratio was once again above 100% suggesting that buyers continue to bid against each other on a regular basis. In August 2013 the ratio was 105.6%. This ratio is often a leading indicator. When it rises and stays above 100% it often signals rising prices, and vice versa when it falls it can signal flat to declining prices. Right now the indicator is signaling continued price increases. 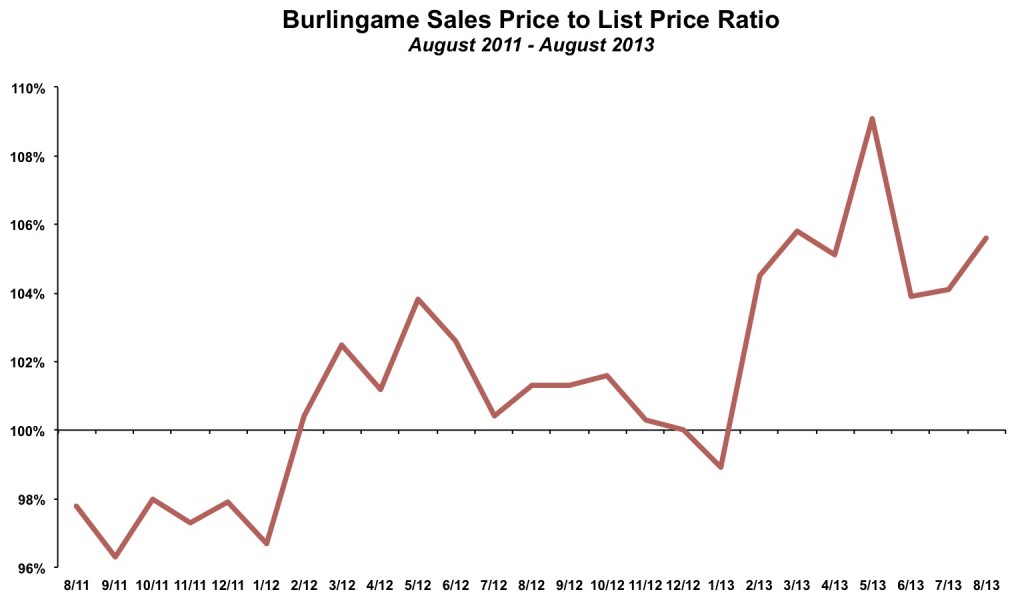 Sales are being hindered by a lack of inventory, which is a result of not enough new listings to replenish the existing level of sales. There have been only 198 new listings during the year, down from 237 listings in the same period in 2012. At the current pace, there will be around 275 listings in 2013. In the past ten years the number has fluctuated between 313 and 381.

Inventory levels are on a multi-year downward trend. We thought maybe we had seen the bottom in early 2013. Inventory was rising during the summer (as is the normal seasonal pattern). However inventory levels fell in July and then barely rose in August. The pace of new listings typically declines later in the fall, so unless there is a rush of homes put on the market in the next month or two we should expect inventory levels to remain low through at least the beginning of next year. 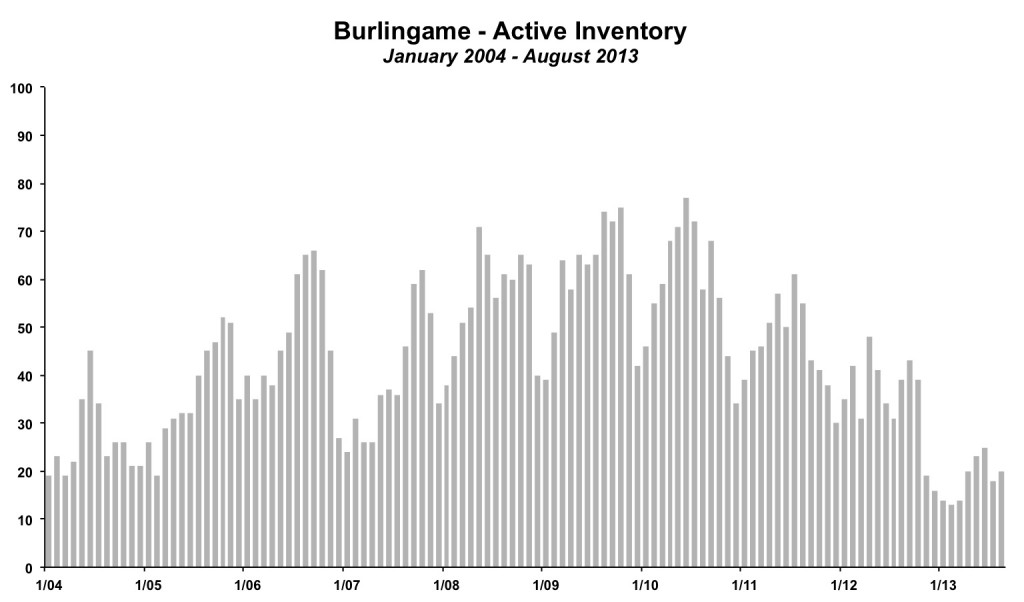 Below is a selection of recent Burlingame real estate sales, sorted by area of Burlingame. While many homes continue to sell above the asking price, not all do. Of the 18 homes shown below, 10 sold for more than the asking price, 5 for less and 3 for equal to the final asking price. It cannot be understated the value of having a local, knowledgeable realtor working for you to help determine the best offer when buying a home. For example, the 3 bed 2 bath home on 2600 Martinez in Mills Estates went for $1.25 million, about $50,000 under the final list price. It could have just as easily gone for $50,000 over had a buyer in the market seen many other homes go over asking and assumed this one would have too. We are talking about swings of $100,000+ on a single home whether it goes for 5% above or 5% below asking, a significant sum of money!

Although homes continue to sell relatively quickly compared to prior years, only a handful of the recent listings are selling in a few days. Most are one the market for at least a week. The vast majority are gone in less than three weeks. Just a few years ago, the average sold home spent closer to 6 weeks on the market.

The $1 million mark is increasingly becoming the starting point for entering the single family home market in Burlingame. The exceptions are listings that are in need of repair/updating and some smaller 2 bed/1bath type bungalow homes.