Most homes continue to sell quickly in Redwood Shores, often for more than the asking price as buyers bid against each other. Here are some highlights for the Redwood Shores real estate market as of August 2013: It is tough to cite a specific moment, but homes selling over the past few months in Redwood Shores were probably the first crop that regularly sold at/above their theoretical counterparts would have in the prior real estate boom. With prices continuing to rise, buyers and sellers in the marketplace through the end of the year should expect to see record prices (though of course there will be variation between homes).

Median and average prices, as well as, average prices per square foot have all increased approximately 20% in the past 12 months. In total, prices are up around 25% since reaching bottom in 2010/2011. 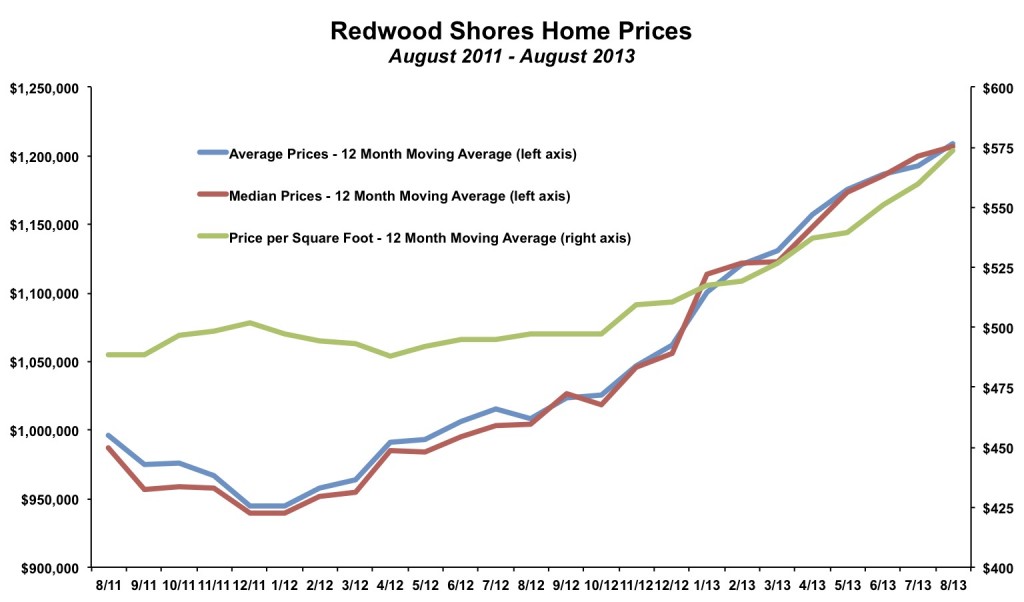 Price increases are being driven by the same factors that we see up and down the Peninsula. There is a lack of supply in the market as inventory levels have shrunk. Consider an average buyer looking into the Redwood Shores market at the end of August; in 2013, there were four available homes for-sale. In 2012, that same buyer would have had seven home from which to choose. In August 2011, there were ten homes, and in August 2010 there were 18 homes. Given the decent local economy, relatively low interest rates, and improved market sentiment, there are more buyers in the market today than there were a few years ago. These buyers are chasing after fewer homes.

The results have been predictable. In addition to rising prices, we are seeing many (but not all) homes sold for above their asking prices (even as sellers adjust list prices upward). The average sold home has gone for nearly 4% above asking. On a $1 million listing, that equates to an extra $40,000. Out in the real estate market, that ends up working out to a handful of homes going for less than asking, a decent amount going for around asking and a sizable minority going for well above the asking price, often 10% more. Homes that do come onto the market are sold quickly. The most desirable listings often go in just a few days after a single open house.

By The Numbers - Redwood Shores Real Estate for 2013

Thinking of buying or selling a home in Redwood Shores?

If you're interested in learning more about the Redwood Shores real estate market, considering selling your home in Redwood Shores, or thinking about moving to Redwood Shores please drop me a line and I'd love to connect with you.