Although we normally try to take a sober look at the real estate markets, sometimes a little hyperbole is necessary to describe what is occurring in a specific area. Prices are increasing rapidly in Lyon Hoag, which may be the 'hottest' submarket in Burlingame. Here are some highlights as of July 2013: In recent years, Lyon Hoag was somewhat of a "value" or "first-time buyer" area of Burlingame. Homes are typically smaller than in the city wide average (by about 400 square feet, though of course there is  variation from home to home) and prices were lower. Even after adjusting for the smaller floorplans, prices in Lyon Hoag were regularly 10% less than other areas of Burlingame. Buyers that wanted to be in Burlingame, but were on the cusp of affordability often looked to Lyon Hoag. The combination of lower prices per square foot and smaller square footage meant that single family homes sold for 30% less than the citywide average.

In the last 18 months, the situation has changed. While prices are rising everywhere in Burlingame (and across the Peninsula and Greater Bay Area), they appear to have risen even faster in Lyon Hoag. In Burlingame overall, prices have increased by approximately 20% since the middle of 2011. In Lyon Hoag, price appreciation over the past 24 months is closer to 30%. The result is that the average price per square foot in Lyon Hoag in 2013 through July ($757) is actually slightly above the average price per square foot in all of Burlingame ($754). Average and median sales prices remain lower, due to the smaller homes in the neighborhood.

Market conditions are as one might expect given the sharp jump in prices. Almost all listings are selling. Most homes are on the market for less than two weeks with many sold in less than a week. Inventory has been low all year long and at the end of July 2013 there were no available homes for sale. Buyers frequently engage in bidding wars. The average sold home has gone for 10% above the list price.

Needless to say, the Lyon Hoag neighborhood is in a sellers market. Buyers need to act quickly and decisively, and just as importantly need to know when not to act. While many homes are going 10% to 20% above the list price, some listings are at current market value. Buyers that go way over will end up paying too much. It helps to work with a Realtor who is knowledgeable about this Burlingame submarket. 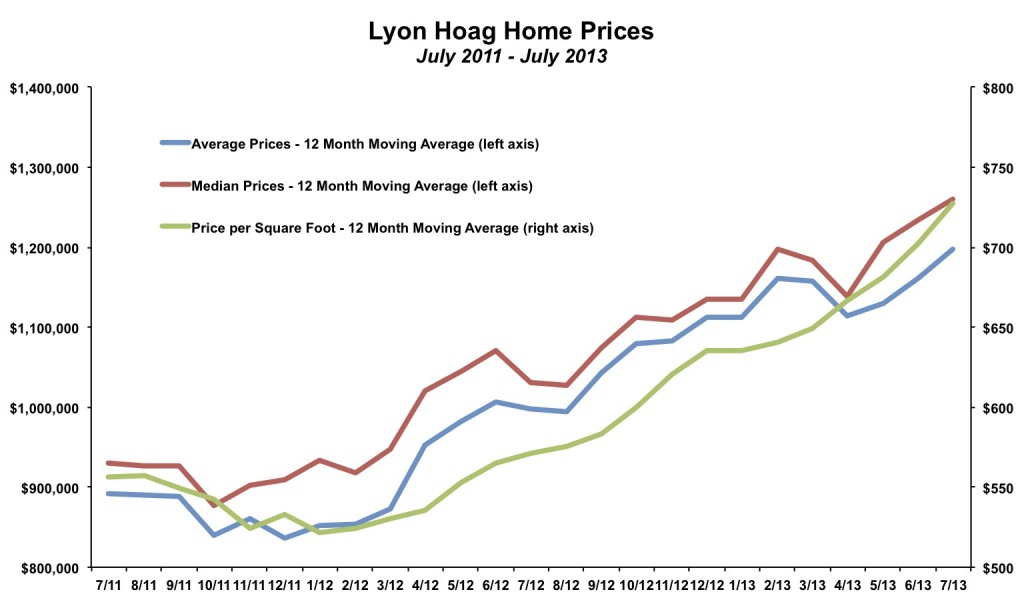 Thinking of buying or selling a home in Lyon Hoag?

If you're interested in learning more about the Lyon Hoag real estate market, considering selling your home in Lyon Hoag, or thinking about moving to Lyon Hoag, please drop me a line and I'd love to connect with you.