July 2014 - Many Homes Continue to Sell Above Asking Prices

It remains a sellers market in Burlingame. Despite increases in asking prices to match rising selling prices, buyers continued to regularly bid above asking. The average sold home in July 2014 went for nearly 7% above asking.

Here are the highlights for July 2014 (comparisons are made to data going back to January 2004):

The chart below shows the 12 month moving average (to smooth out random month-to-month variation) of the average price, median price and average price per square foot in Burlingame. At first glance, it looks like median prices (the red line) and to a lesser extent, average prices (the blue line) have mostly stopped their ascent. Yes, there may be some slowdown in the pace of price increases in the Burlingame real estate market, but not to the extent shown in those lines. Over the past 12 months, the average home sold in Burlingame was 2,064 square feet (and in the past six months it was even slightly smaller than that). In the 12 months prior, the average sold home was 2,190 square feet. A "normal" average in Burlingame is between 2,000 and 2,100 square feet, but in any given time period it can fluctuate a lot depending on which homes happen to have been listed. This recent random fluctuation means that the average home on the market has been about 6% smaller than it was in the preceding period. Given that smaller homes tend to sell for less, we would expect that to reduce average and median prices by close to 6%. If we were to boost the red line by 6% and the blue line by 6% it would look like smoothed average prices had risen by 14% in the past 12 months to $1.8 million and median prices had risen by 9% to $1.65 million.

A truer measure of price increases in the market right now is the price per square foot. This statistic continues to rise as buyers are spending more for the same amount of house (which is mainly what we are trying to deduce). On a year-over-year basis, the smoothed price per square foot is up 15.7%. The peak level of appreciation was in April 2014, when it was up 17.6%. 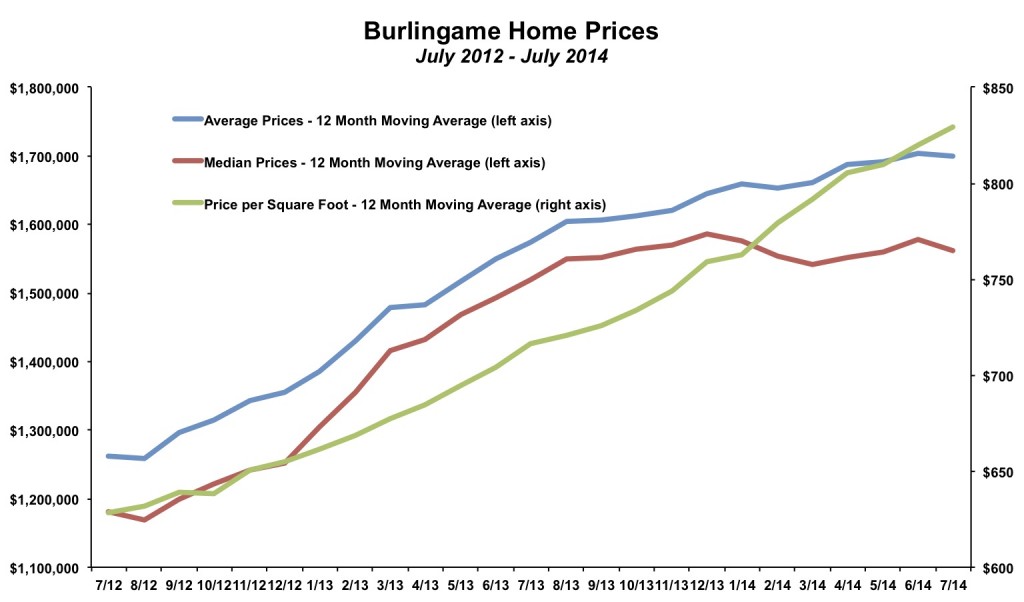 Buyers continue to bid above asking prices. The ratio of sales price to list price in July 2014 was 107%, meaning that buyers paid on average 7% more than the final asking price. The ratio has been above 100% in 28 of the past 30 months. 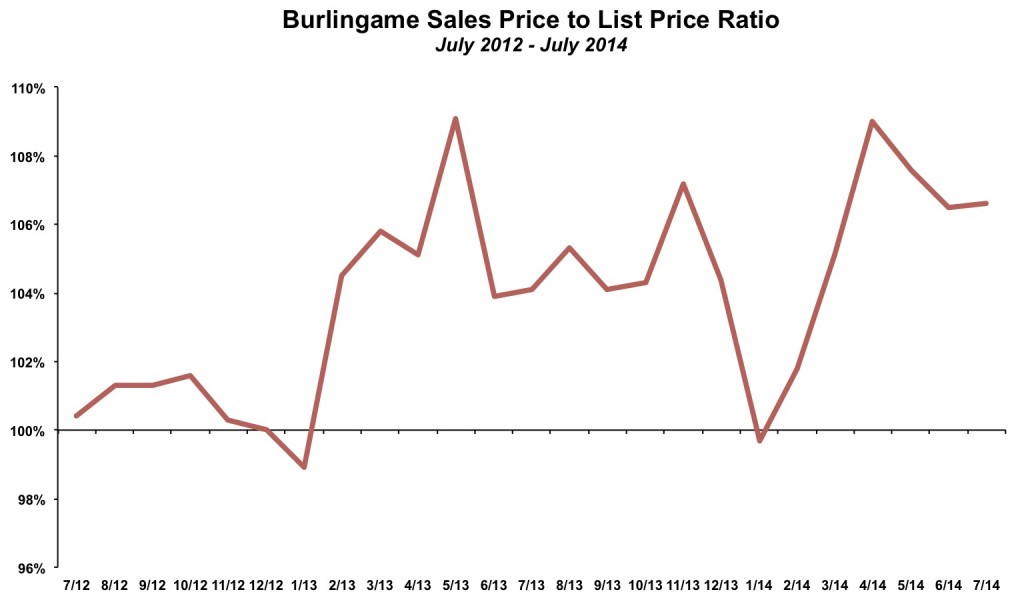 There were 18 homes sold in July, which is modest for the mid-summer month when sales activity is typically near its peak. For the year, sales are down about -16%. Through the first seven months of 2014, 131 homes sold, as compared to 156 homes sold in the same period in 2013. Falling sales is often one of the first signs that a seller's market is losing steam (even before a drop in prices). However, the process can take a long time. Sales started falling as early as 2005 in the last real estate cycle. Prices however continued to rise well into 2007.

One reason to not be too alarmed by fewer sales is that there has not been an accompanied rise in inventory levels. Inventory levels remain at historically low levels in Burlingame, and seem to have reached a bottom. There were 21 unsold homes for sale in the city at the end of July 2014, about the same as July 2013, when there were 18 unsold homes. 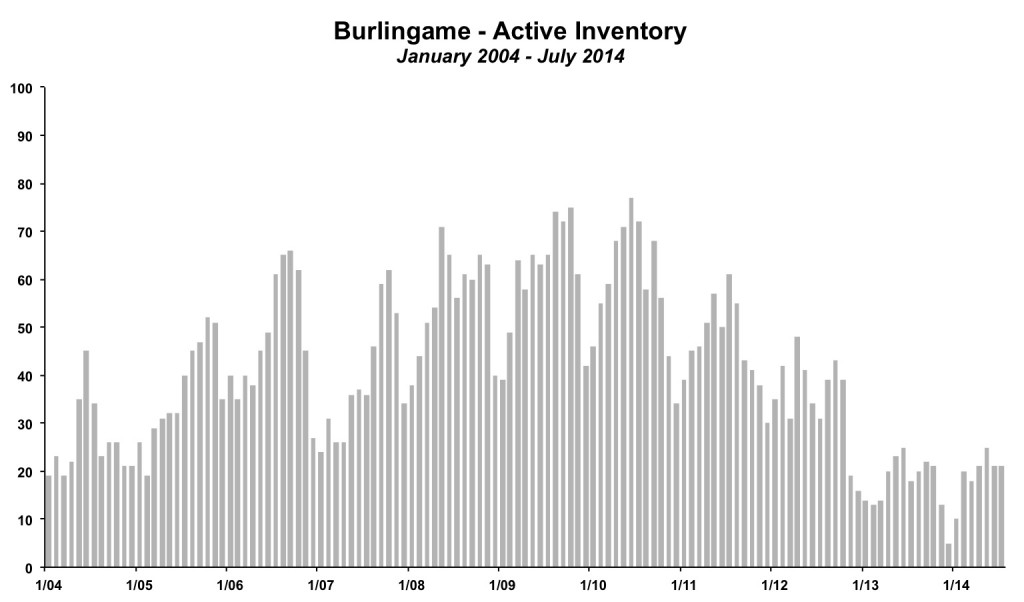 Below is a selection of recent Burlingame real estate sales, sorted by area of Burlingame. These individual sales encapsulate a lot of the trends we are seeing in the marketplace.

Many homes continue to sell quickly. Every single one of the homes listed below sold in less than one month, and most had accepted offers in less than two weeks.. Just two years ago, the average sold home was on the market for one month.

Many homes are selling for above their final list price. Of the 17 homes in the list below, all but two sold for at or above the asking price. Once again, we saw the ~20 day divide. There were four sold homes that were on the market for more than 20 days. Two of the four went for less than the asking price and the other two sold for a rounding error above asking. A general rule of thumb for buyers is that in the first few weeks (about 20 days) on the market, homes can end up selling for well above or below asking. Once a home passes that point, it is increasingly likely to sell at or below the asking price. You would think that it would be a gentle slope, but it actually ends up being more of a drop-off. So homes on the market for 10-20 days still sell above asking regularly, but once you get to 3+ weeks, the percentage that sell for more than the list price diminishes significantly.