It remains a sellers market in Burlingame. Prices continue to rise. Inventory remains at historically low levels. Most newly listed homes are selling in less than 20 days, and more often than not for above asking prices.

Here are the highlights for April 2014 (comparisons are made to data going back to January 2004):

The chart below shows the 12 month moving average (to smooth out random month-to-month variation) of the average price, median price and average price per square foot in Burlingame. On a year-over-year basis, prices have increased by around 15%. Since reaching bottom in the middle of 2011, prices have risen by more than 35%. 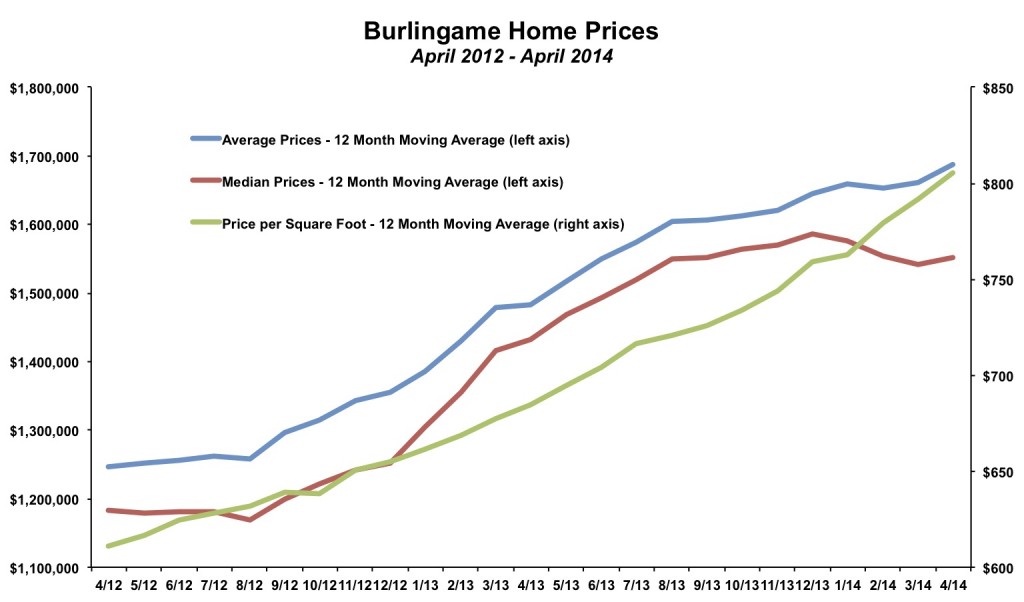 The ratio of sales price to list price is one indicator of market demand. In most areas, when the ratio is greater than 100% it is a sign that there are bidding wars and prices are rising. When the ratio is below 100%, sellers are having to cut prices to make the sale. Prices have been rising for the past three years in Burlingame. Sellers have adjusted their list prices accordingly. Despite this, buyers continue to bid above asking prices. The ratio of sales price to list price in April 2014 was 109%, meaning that buyers paid on average 9% more than the final asking price. 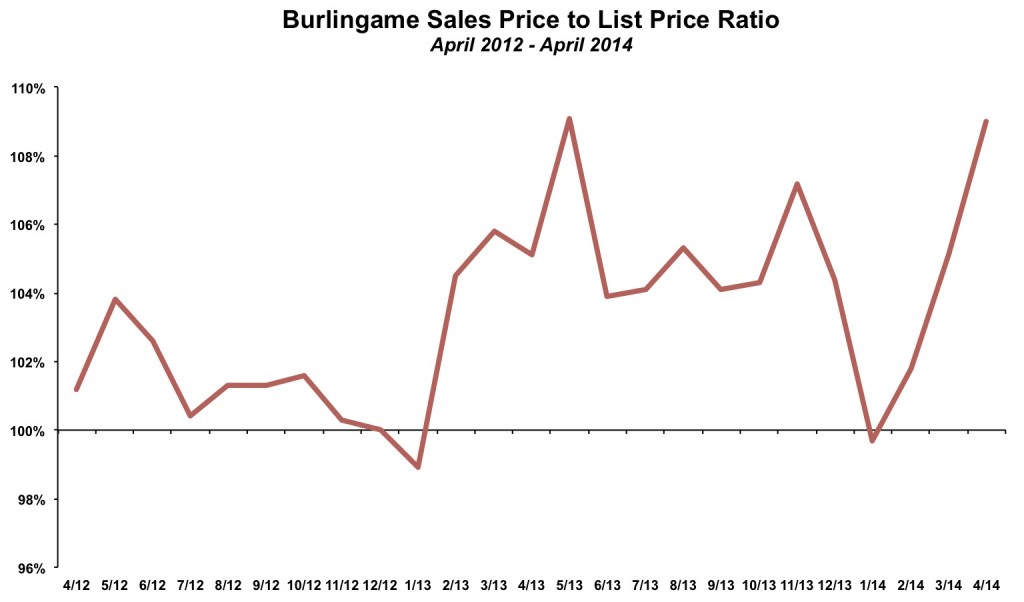 After a slow start to the year, sales jumped higher in April. There were 37 homes sold in the month. It was the second highest monthly total in the past ten years, behind the 40 sales in the middle of 2012. Despite the strong month, sales activity is still actually down year-over-year. Through the first four months of 2014 there have been 67 homes sold, down slightly from the 69 homes in the same period in 2013.

Inventory levels remain at historically low levels in Burlingame. There were just 20 unsold homes for sale in the city at the end of April 2014. This is even with where the market was a year ago and represents the lowest April inventory in at least ten years.

Low inventory is a positive for sellers. Until we see an uptick in inventory, we should expect prices to continue to increase. 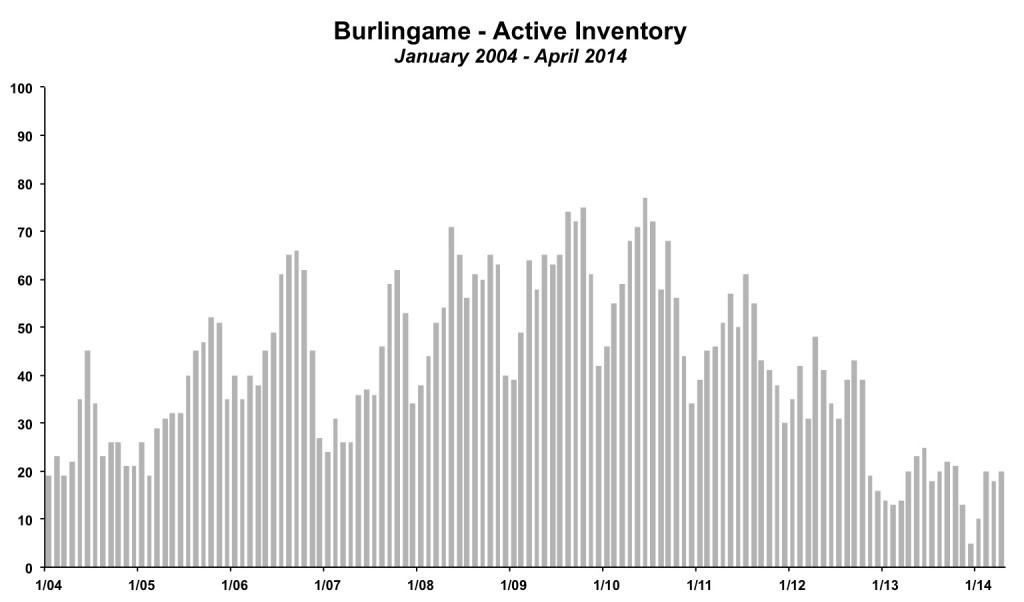 Below is a selection of recent Burlingame real estate sales, sorted by area of Burlingame. Looking at these 31 sales gives the same conclusions as the summary data, but it certainly makes the data more "real" to look at individual sales.

Homes continue to sell quickly. Only 3 of these homes were on the market for more than 30 days. Most sold in less than 3 weeks.

The sub $1 million single family home sale remains a rare species in Burlingame. There are only two such sales in our sample below. Just as impressively, there were only four sales less than $1.25 million.

Sales of $1,000 per square feet used to be rare. There were about 10 such homes in all of 2013. There were eight alone in April 2014 (and 12 in just the March and April timeframe). A 2 bed, 2.5 bath, 1,210 square foot home on Los Montes in Burlingame Hills sold for $1,608,000, nearly $500,000 above the asking price. On a per square footage basis, the price was $1,329. It is one of the highest per square footage sales in Burlingame ever. The house itself was rather unremarkable. The buyers paid for the 9,500 square foot lot and bay views. As prices surge, we are increasingly see buyers pay more for expandable lots. The cost of construction, even including the permitting process, is significantly less than the price of buying the actual finished square footage at retail. 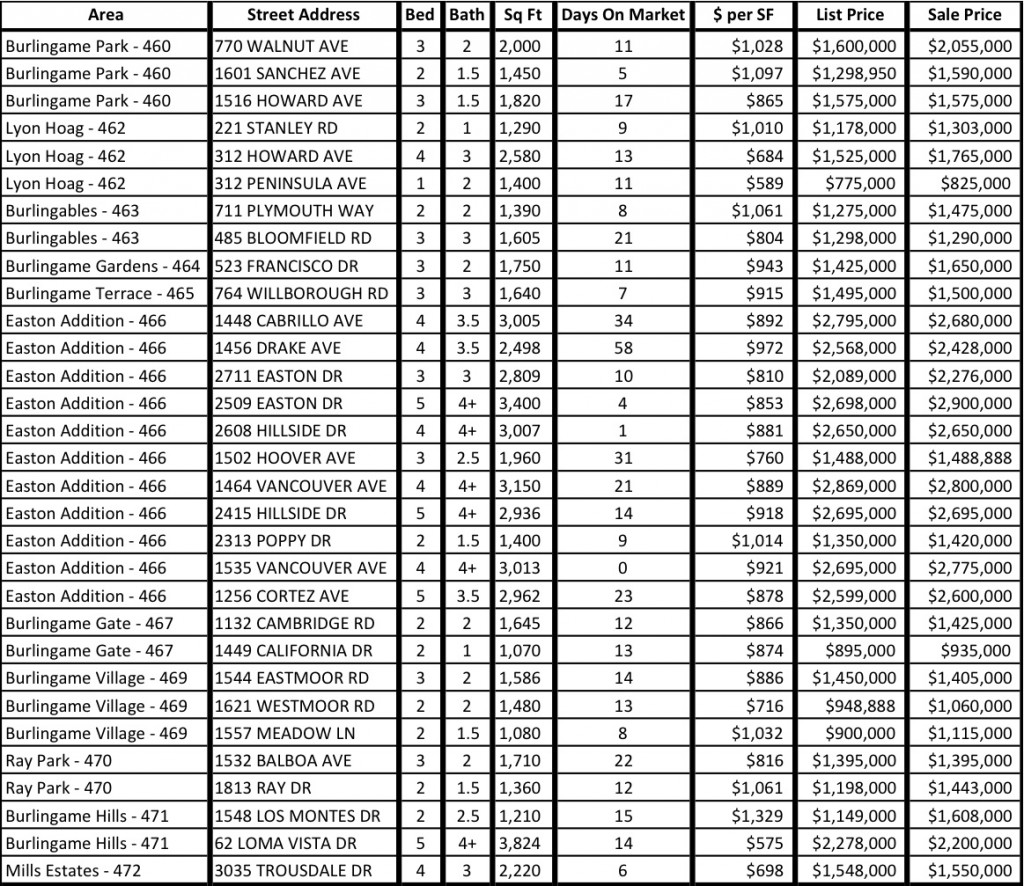