Everything Points to a Seller's Market

Every piece of data points to a sellers real estate market in Belmont. Prices are rising, buyers are bidding above asking prices, sales are up, days on market are down, listings are down, inventory has plummeted and expired/cancelled listings are way down.

The graphic below shows the 12 month moving average (to smooth out any month-to-month fluctuations) values of the average price, median price and average price per square foot in Belmont. Although there has been a steady upward trend since late 2011/early 2012, the real spike has occurred in the past six months. During that time prices have increased by about 7%, which on an annualized basis is +14%! 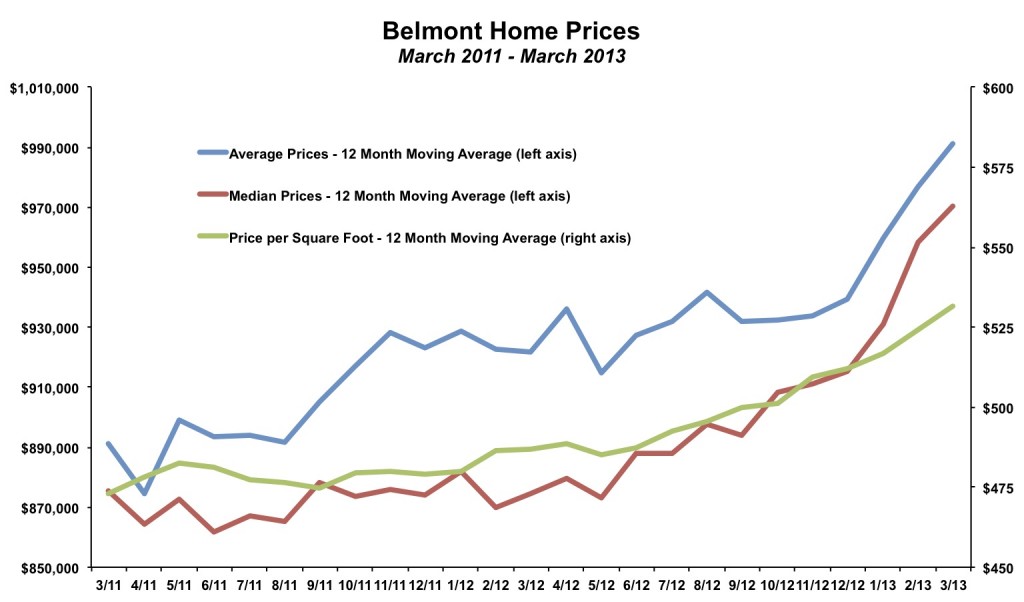 Many listings are receiving multiple offers, often with more than one above the asking price. The average sales price to list price ratio has been above 100% for most of the past 12 months, which implies that the average home is selling for more than the final list price. The last two months have seen particularly aggressive buyers with the ratio at 108.7% in February and 108.5% in March. In prior months it was usually between 100% and 103%.

It can be difficult to pinpoint one reason as to why buyers are bidding above asking prices. It really depends on how much you peel back the proverbial onion layer. One of the foremost reasons is that there just is not much supply out there. At the end of March 2013, there were just 12 homes still on the market in Belmont, down from 33 at the same time in 2012. Given the robust local economy, there are more buyers bidding on fewer homes and the equilibrium has shifted towards sellers.

There have been 46 homes sold in the first quarter of 2013 in Belmont, up slightly from 43 homes sold in the first three months of 2012. Sales would have increased much more except for the lack of existing and new inventory. 2012 ended with inventory levels very depleted. There have only been 58 new listings to start the year, down sharply from 87 new listings in the first three months of 2012. Sales activity in the rest of 2013 looks to be a product of how many homes are listed, as there is clearly excess buyer demand.

If the ultimate goal of a seller is to sell their home, then 2013 has been very successful. Only four listings have expired or been cancelled, which is a proxy for homes that did not end up selling (though there can be other circumstances). In the same period in 2012, there were 20 expired/cancelled listings. 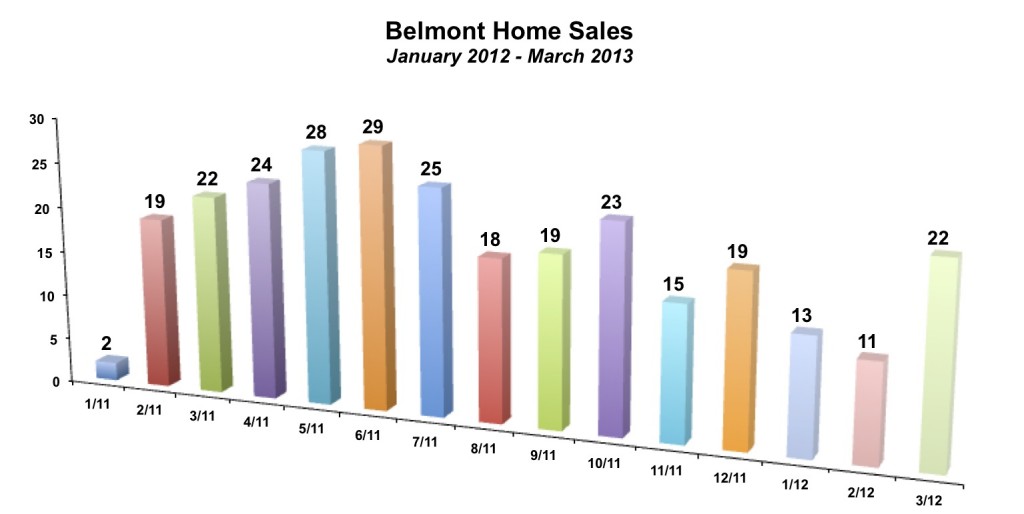 By The Numbers - Belmont Real Estate for 2013