This profile is part of an ongoing series of features I’m doing on notable people who live and work in San Mateo County. The Peninsula is full of local luminaries like Lee Kravetz, a San Mateo-based author and therapist whose first book, “Supersurvivors,” examines the positive impacts trauma can have on individuals. I've known Lee for two years since he purchased his home on the peninsula.

Lee Kravetz was living the dream. The aspiring writer was 29 and a newlywed, living in New York and working for a major publishing house. To the casual observer it seemed he had it all, but in fact, the Texas-raised Kravetz was miserable. “I was at a job I didn’t like,” he recalls. “My life was in a place that wasn’t real great.” 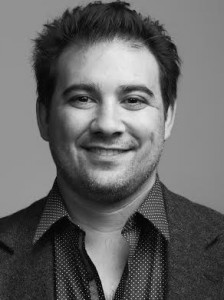 And then he was diagnosed with cancer.

Faced with the harsh reality of his own mortality, Kravetz took immediate stock of his life. “The first thing I remember thinking was, ‘I’m 29 and I haven’t done anything to help anyone.’ That stayed with me,” he says. It stayed with him long after he’d conquered his illness, in fact.

Faced with the reality of a future, he began a journey whose latest chapter is the completion of his first book, “Supersurvivors; the Surprising Link Between Suffering and Success.” The book, appropriately, explores the connection between following trauma with great accomplishment; appropriate because that’s exactly the path Kravetz himself has followed.

Far from derailing him, his illness forced him to rethink his life. As he recalls, “After I got sick I figured, one, life is short; two, my writing career is going nowhere and three, I didn’t know what to do next.” One thing was certain: working in marketing, even for a publisher, wasn’t going to cut it. Mulling over his options, Kravetz kept returning to the same idea: that at age 29, he “hadn’t done anything to help anyone” yet in his life. 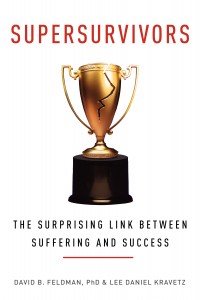 “The thought stayed with me,” he recalls. He was seeing a therapist at the time and found himself inspired. “I thought, ‘this person helped me. Maybe I should do this, too.’” Shortly after that, Kravetz, his new very understanding bride in tow, left New York and enrolled in the Masters program at Santa Clara University, where he met David Feldman, a young Associate Professor and one of the world’s leading experts in Hope Theory, a belief that people can find pathways to reach their goals and that hope can drive emotions and well-being.

This is not a new way to describe having a sunny outlook on life. When Lee Kravetz talks about Hope Theory and “positive psychology,” he’s not parroting Norman Vincent Peale; far from it. “Supersurvivors” is not a guidebook outlining the power of positive thinking, because Kravetz finds that concept limiting at best. At worst, he finds it potentially damaging.

“Positive thinking is always going to be better than negative thinking,” he reasons, “but what if you’re not a happy or positive person? Does that mean you’re doomed? That sense of self-blame, the sense of control that doesn’t exist, it’s damaging.”

“Supersurvivors” introduces an idea called “grounded hope,” which is based on grounded thinking and positive actions. “The idea is to look at a situation with wide open eyes,” Kravetz says. “Seeing the truth behind the situation. “It’s not saying, ‘Gosh, life is great and good things are going to happen,” it’s looking at the possibilities and saying, ‘This is where I am and what I can do with this situation. Instead of looking at the negative side of anxiety, depression and trauma, it’s people using their positive attributes to pull themselves through… and, in many cases, come out the other side a far more realized person than they were when they went in."

“Supersurvivors” began as an independent research project while Kravetz was studying at Santa Clara. Working with Feldman, he wanted to look at the aftermaths of illness survivors like himself. While digging, he found some research suggesting that some survivors don’t just “bounce back,” they “bounce forward.” “They have new ideas, new directions they want to take with their lives,” Kravetz explains.

Having changed his life after enduring a trauma, Kravetz was intrigued. With Feldman’s encouragement and eventual participation, he expanded the scope of his project to include not just illness but all sorts of trauma. Working together, Feldman and Kravetz interviewed hundreds of people ranging from anonymous citizens to Bishop Desmond Tutu.

They spoke to Casey Pieretti, a college basketball player who lost one of his legs in an auto accident and later became a successful movie stuntman and to Alan Lock, who lost his vision at age 25 then became a marathon runner and the first visually impaired person to trek to the South Pole and to row across the Atlantic Ocean. They heard the story of Asha Mevlana, whose response to breast cancer was to quit her corporate job and pursue a career as a violinist and to swimmer Maarten van der Weijden, who won Olympic gold after surviving leukemia.

Lock, in particular, made an impression on Kravetz. “He told me the first time I met him that he’s not a positive guy,” Kravetz marvels. “He’s outwardly negative. And people kept telling him to think positively, that good things would happen.”

There is an element of “why me” to every trauma story, Kravetz says; it’s normal to think that way. “Post-traumatic growth” is on the same spectrum as Post-traumatic stress. “One of the worst things you can do is tell someone to ‘just get over it,’” Kravetz cautions. “There is no silver lining to a tragedy, but growth is something that happens, to 70 to 80 percent of trauma survivors.”

“I didn’t meet a single person who said, ‘I wish this (trauma) had happened to me,’” Kravetz continues. “Nobody said, ‘I’m glad I got this cancer.’”

Instead, traumas served to create focus, to “make the important things extra important.” “That’s post-traumatic growth,” Kravetz says. “Wouldn’t it be great if you can get to that without going through something traumatic.”

Kravetz did go through something traumatic, at age 29, and he did experience post-traumatic growth. He continued on his path even when “life started creeping back in,” as it inevitably does, working on “Supersurvivors” for almost four years. Now, long after deciding to give up his literary dreams, he is a book author with a multi-book deal with a major publishing house. His next book, he says, will expand on the ideas covered in the first. He never planned to become an “expert” in his field, but it’s working out that way.

He’s also a Peninsula resident, living in a San Mateo Highlands Eichler with his wife and two small children, active in local writing circles and with his own private therapy practice. It’s impossible to know how Lee Kravetz’ life path would have arced, had he not gotten bad news that day, but it’s safe to assume he would be somewhere other than where he is now and that he likely would not have found his calling, examining the resiliencies and possibilities of human beings facing great challenges.

View the trailer of Supersurvivors below: