While not experiencing the same bidding wars as neighboring Burlingame and San Mateo, and nearby San Carlos, the data shows prices are rising in Hillsborough. In 2012, the average price, median price and average price per square foot were all at the highest annual value since 2008. Data from sales in early 2013 sales and the latter half of 2012 suggest prices are on an upward trajectory.

February 2013 data appears to show huge price increases, but with so few sales, data can be skewed by a few outliers. There were two such outlier sales in February, pushing up the average price in the month to nearly $6 million, versus a normal average of $2 to $3 million. Let's take a further examination, as they provide a good insight into the upper end of the Hillsborough real estate market.

A 9 bed home sold on the 3000 block of Ralston for $13 million. It was last sold in 1996 for $3.25 million, which means that the average annual price increase was approximately 8.5%. The Tudor style home had been restored and well maintained, so the average price increase is not necessarily reflective of general trends, but it does show which direction prices have headed over he past 20 years. Interestingly, the seller originally listed the home in March 2012 for $16.5 million. The home was removed and relisted twice, before eventually selling for $13 million.

A 6 bed, 11,000 square foot home sold on the 1800 block of Floridbunda for $9.9 million. It was last sold in 1995 for $2.65 million, which means that the average annual price increase was approximately 7.5%. Once again, the Mediterranean style home on 2.5 acres was well maintained, so the price increase is above what a homeowner who put minimal investment into their property may have realized. This seller originally listed the home three years ago in April 2010 for $16.8 million. It was removed and relisted many times, eventually selling in February 2013 for $9.9 million.

Both of these homes point to a few unique factors of the Hillsborough. One is that homes regularly sell for less than the asking price. Even in the frenzied markets of 2004/2005, the average home sold for less than the final asking price. Another is that the level and trend of selling values are in the eye of the beholder so to speak. From the point of view of the seller on Floribunda, prices are depressed and the market is soft, after all, it took 3 years and a price cut of almost $7 million to sell their house. From the point of view of the buyer, the selling price was 273% greater than in 1996, while a broad measure of stock prices, the Dow Jones, was up only 188%. 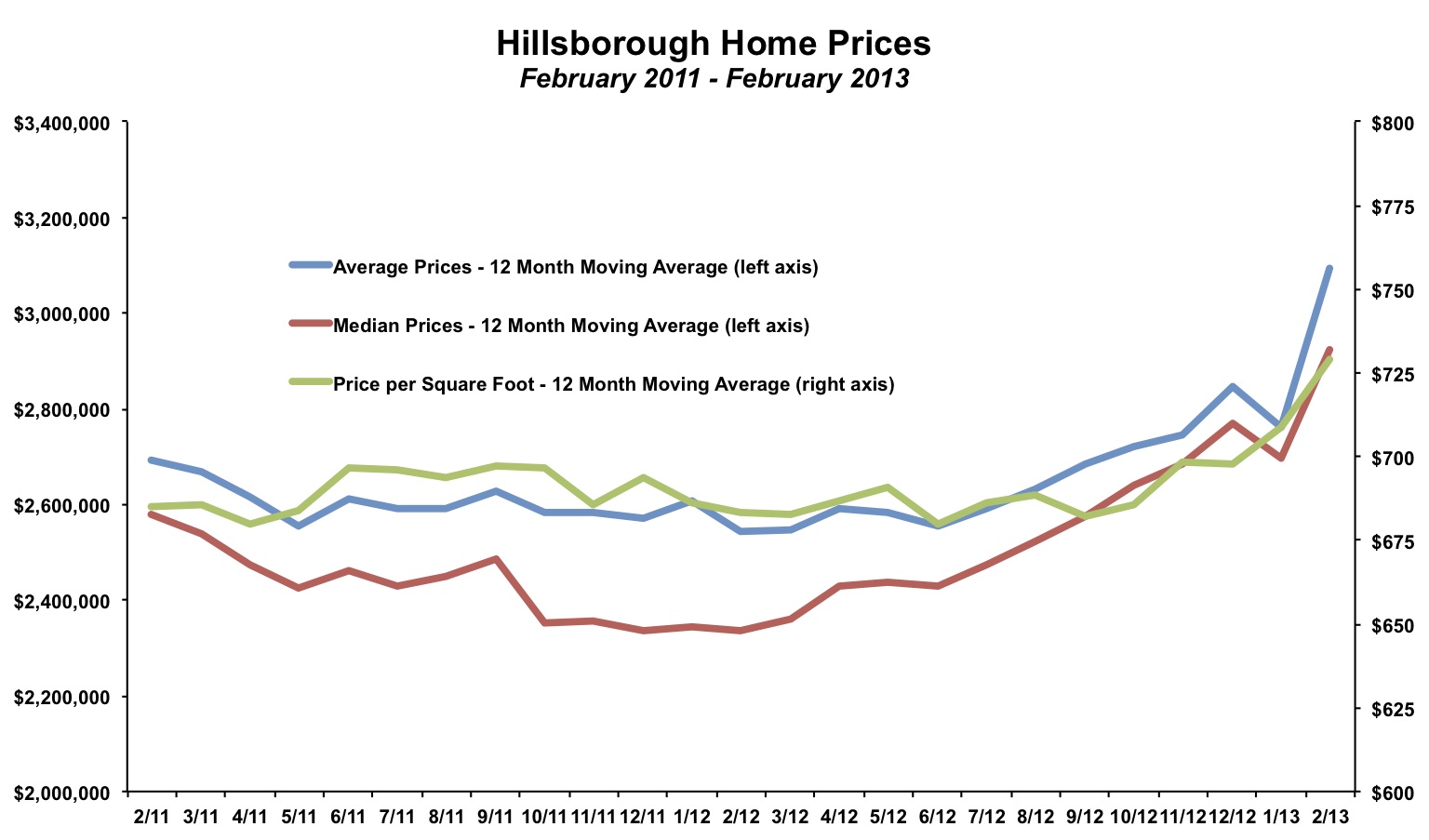 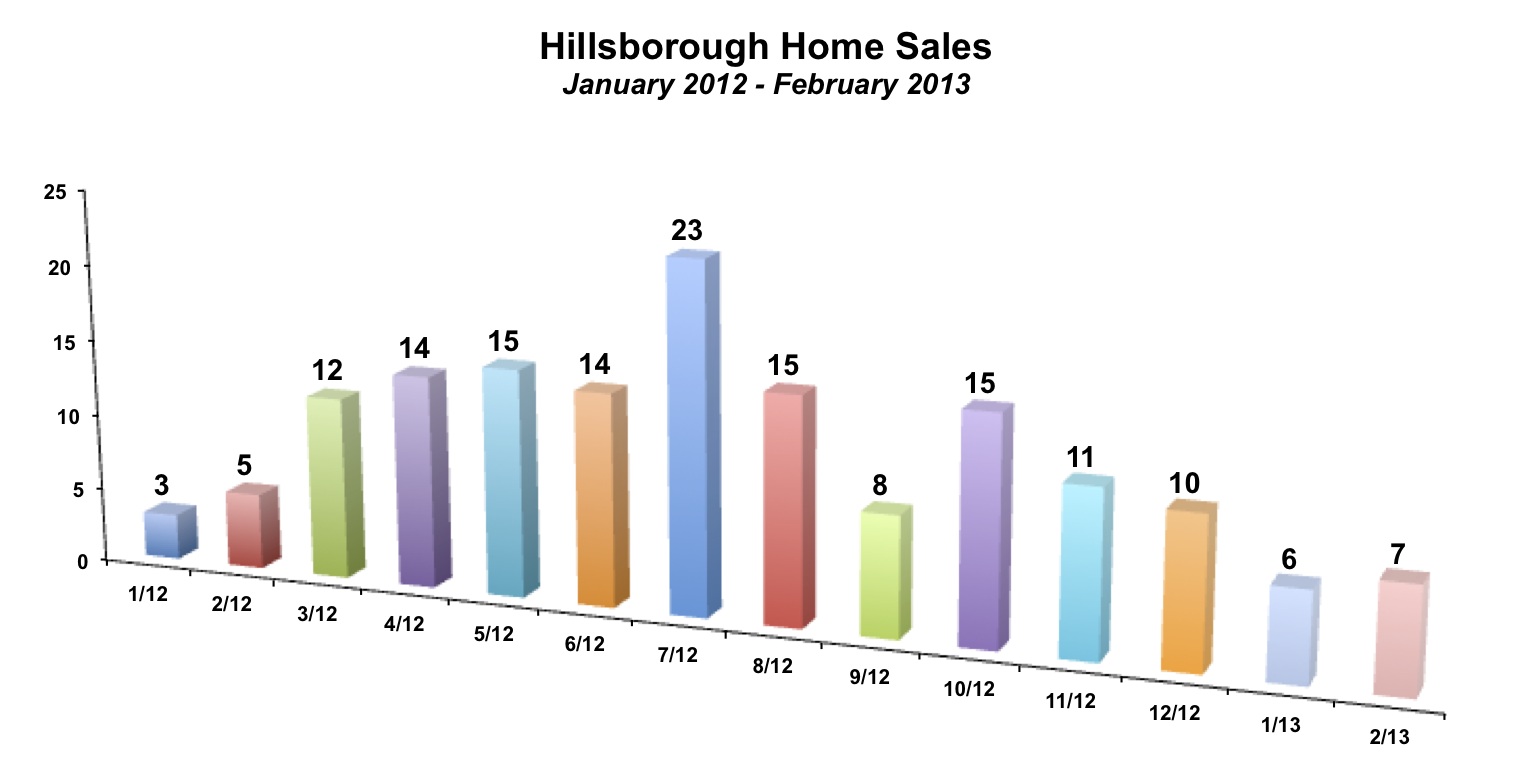 Unlike some areas of San Mateo County, where inventory levels are at historically low levels, the Hillsborough real estate market has closer to an average level of listings. At the end of February 2013, there were 51 homes on the market in Hillsborough, only two fewer than February 2012. In comparison, Burlingame had 13 homes left on the market at the end of February 2013, just 1/3 as many as in February 2012. Because there is more inventory, buyers are less likely to get in a bidding war in Hillsborough than neighboring real estate markets. Buyers that had mentally crossed Hillsborough off the list owing to high home prices, and instead looked at the upper end of Burlingame, San Carlos, Redwood City, etc..., may want to to reconsider given recent price appreciation in surrounding areas. 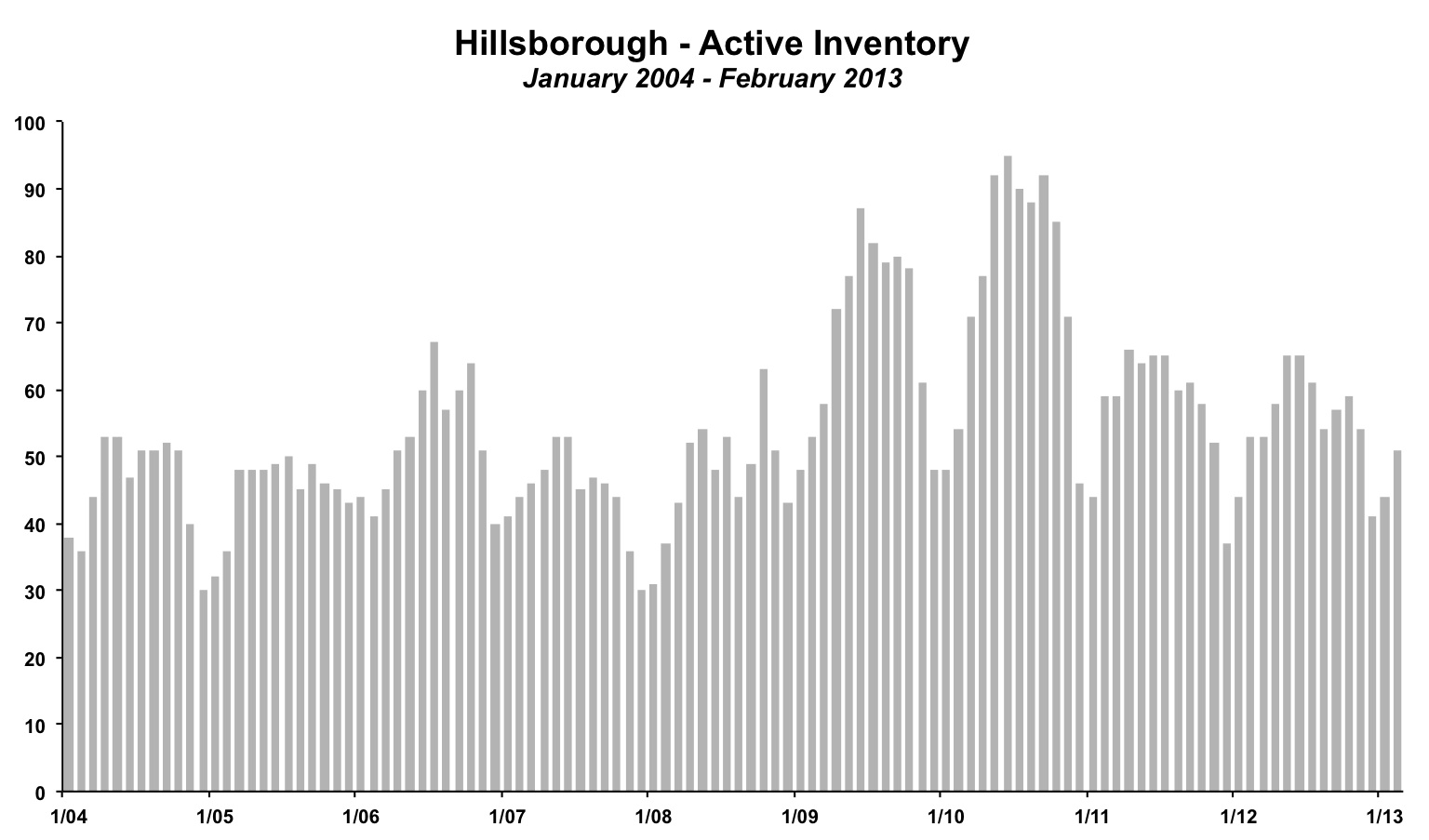