All Signs Pointing to Record Prices

Our review of both the submarkets and the entire San Mateo County all suggest that it is still a sellers market in the Peninsula. Here are the highlights for the San Mateo County real estate market as of March 2014 (comparisons are made to data going back to January 2004): While monthly record values suggest that prices are at their highest levels ever, looking at just one month can be an aberration. The chart below shows the 12 month moving average for median price, average price and average price per square foot. The moving average helps to smooth out random month-to-month fluctuations. In a fast rising market like we are currently in, it probably understates the true level of pricing, but it does provide a good benchmark on which to compare current prices to historical levels. As of the beginning of 2014, this smoothed average view shows that prices have surpassed the previous peak seen in late 2007/early 2008. 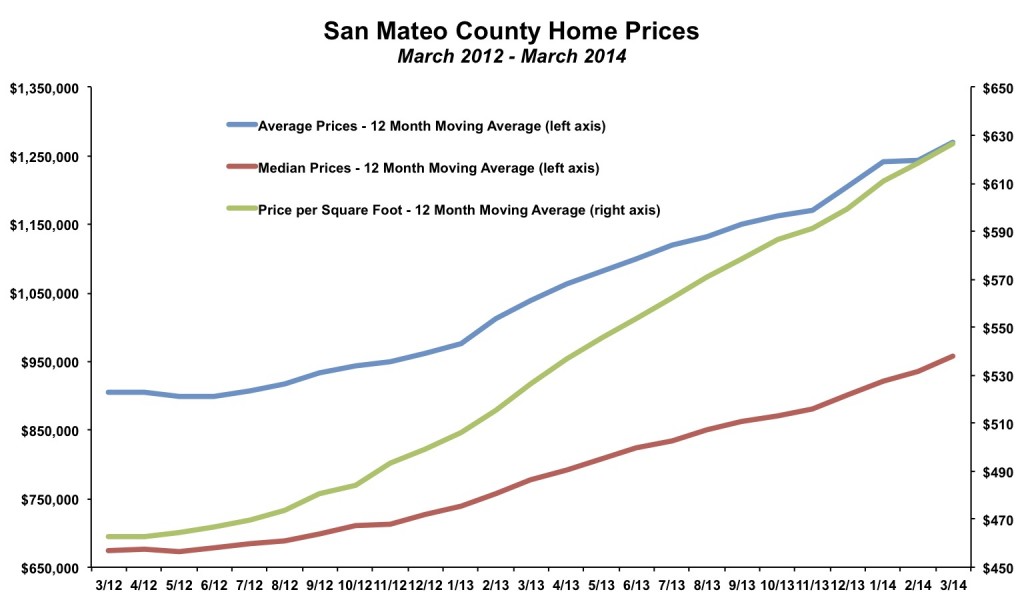 On a year-over-year basis, prices are up somewhere in the range of 15% to 20%. Since reaching bottom in late 2011, prices have risen by around 35%. It varies from home-to-home and area-to-area, but in general, a home that sold for $750,000 at the trough of the market cycle 2+ years ago would be expected to sell for just over $1 million today.

Despite the asking prices being adjusted upwards for new listings based on recent price increases, buyers continue to engage in bidding wars. The ratio of sales price to list price was 106.5% in March 2014. This means that the average sold home went for more than 6% above the final asking price (not all homes sold above the asking price, many sold for less and many sold for 10% or more than asking). The reading of 106.5% was the second highest in the past ten years in San Mateo County. The highest was 106.8% in April 2005. As long as the ratio is above comfortably above 100% it is a short-run predictor that prices are likely to rise at least over the ensuing couple of months. 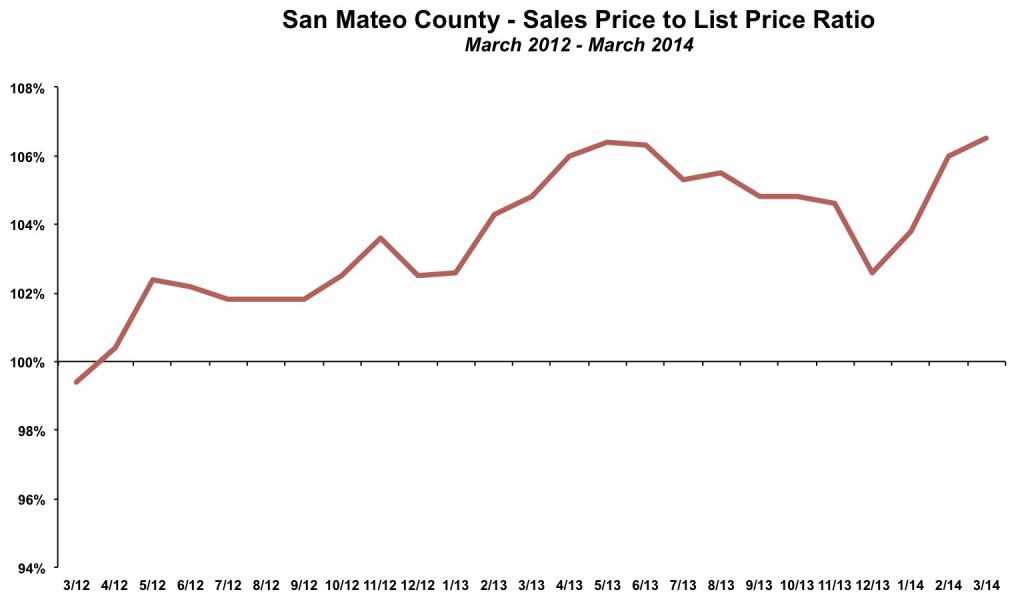 Sales Activity Down to Start the Year

Not surprisingly, falling sales (less demand) and rising inventory (more supply) is often a precursor to softer real estate pricing. In a textbook real estate cycle, when sales activity starts to slowdown and inventory begins to rise, the rate of price increases begins to slow. Prices will continue to rise, and then eventually inventory rises enough relative to the number of sales that prices begin to fall as more and more sellers cut asking prices and accept lower offers. It is of course rare for a market to perform exactly like that in the real world, but the general idea holds true. The first sign of falling sales and rising inventory is often a signal that the rate of price increases is likely to diminish.

But these sales figures are a bit misleading. Theoretically, the most number of sales there could be in the three month timeframe is if every unsold home at the end of the preceding year and all of the newly listed homes in the first three months sold. In 2012, this opportunity of sales was 2,539. There were 1,046 sales, a ratio of 41% (note: of course, we would never expect all of the homes to be sold, this is just a construct). In 2013, the opportunity fell to 1,755 homes. With 912 sales, the ratio actually increased to 52%. In 2014, the opportunity declined further to 1,650 homes. This time the ratio did decline, but only to 49%. In other words, not a lot changed between 2013 and 2014. Perhaps we are seeing the first sign that the rate of price increases has reached a peak. But at 20% year-over-year increases, this had to happen sooner or later. 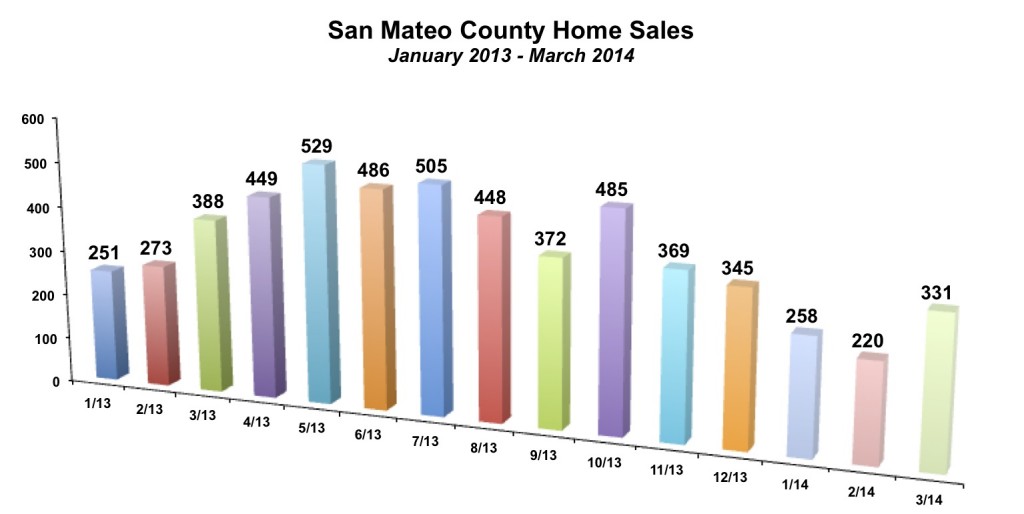 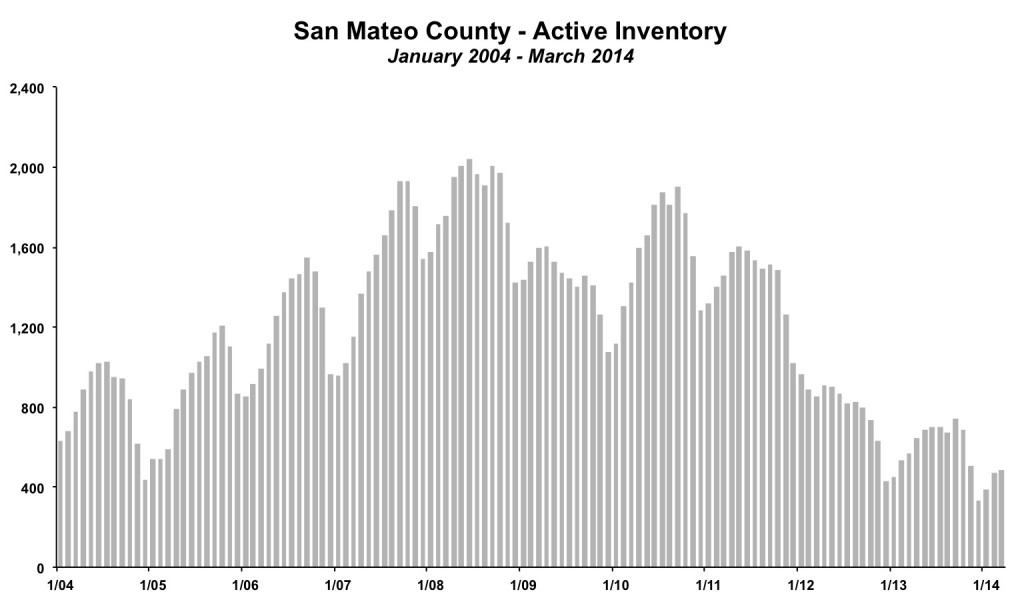