Chances are, if you’ve spent any time in Burlingame you’re familiar with the work of artist Dale Perkins. Maybe you were one of the fifth-graders charged by Perkins in 1963 to create twin mosaics for the entrance to Roosevelt Elementary School, or a teacher he helped during his 26 years working as an art consultant in Burlingame schools. Maybe you were having lunch at Il Fornaio and you espied the brilliant Perkins watercolor gracing the downtown restaurant’s 2011 Burlingame Beautification Society Landscape Award, or you saw Perkins’ ink sketches of notable Burlingame and Hillsborough homes during a Burlingame Community for Education kitchen tour. Maybe you noticed a Perkins watercolor at the entrance to the Coyote Point Yacht Club, or you received a pen-and-ink “Hole in One” illustration after notching an ace at the Green Hills Country Club.

One way or another, Dale Perkins has impacted your life. 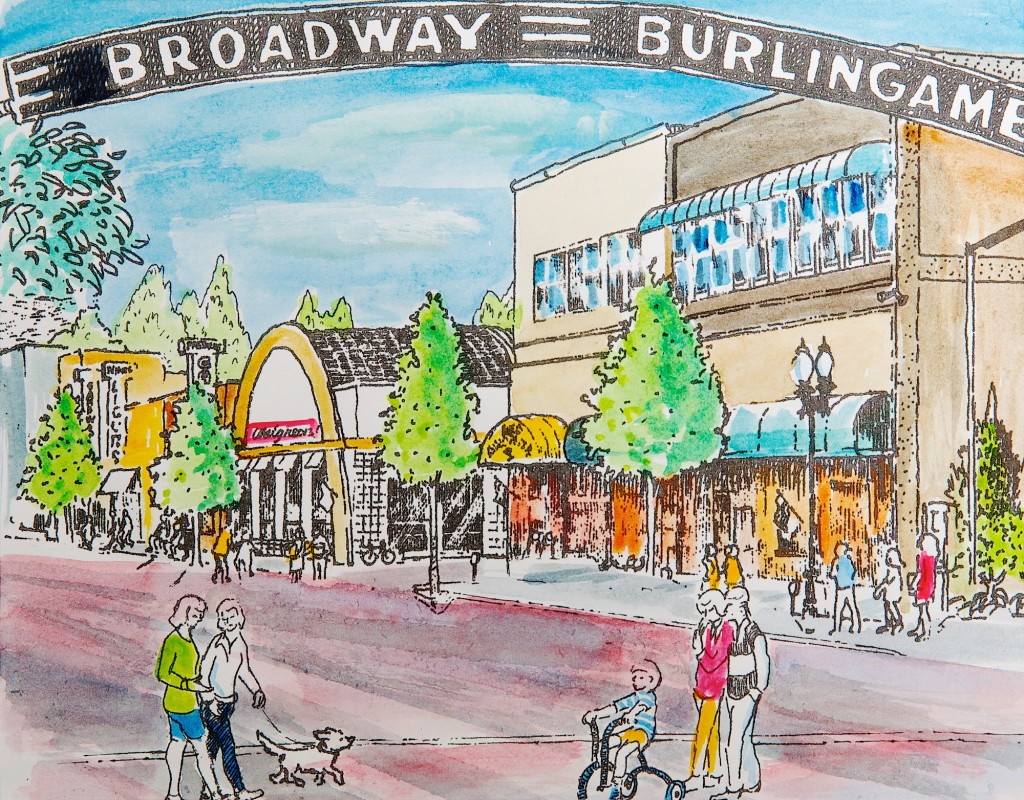 In 1963, acting on a tip from a friend, Perkins applied for a job as an art consultant with the Burlingame School District. Then in his early 30s, with a wife and two children, Perkins had already done a life’s worth of living.

He’s a favorite son of San Francisco who was born in Minnesota, where he lived until age 12 – long enough to develop a love of nature – and life. “As long as I can remember, I was fascinated with living things,” he recalls, “frogs, snails, snakes, fish, trees… That was my daily world.”

Growing up in Minnesota, Perkins says, was “totally sensory.” So was San Francisco, where Perkins’ father eventually moved his family, but in a very different way. “What a culture shock,” Perkins says. “No more frogs and water, only buildings and noises.” Eventually, he came to not only adopt but to love his new city, treating its crowded streets with the same reverence he held for the natural surroundings of his early childhood.

The family settled into a small flat at the intersection of Ellis and Hyde Streets. In 1945, schoolboy Dale Perkins stood on that corner and hawked newspapers bearing the headline “Extra! F.D.R. Dies!” At Commerce High School he played basketball against future San Francisco Mayor George Moscone. After graduation, he spent the summer of his 19th year working in a copper mine in tiny Holden, Washington. Later, Perkins was on active duty with the Sixth United States Army, where one of his friends was “Mr. Spock,” Leonard Nimoy. Perkins has a photo of himself with Nimoy, looking impossibly young in their army uniforms, hung in the hallway of his Burlingame home. 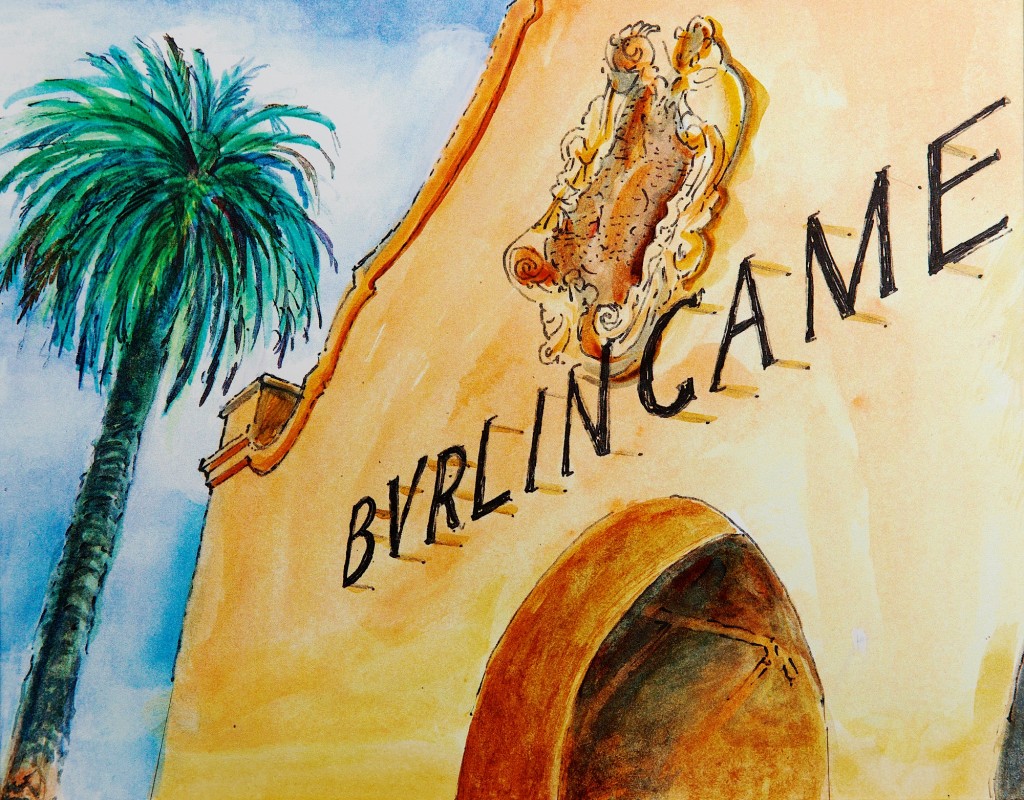 Whatever the adventure or setting, one common thread has run through Perkins’ life: art. He remembers a teacher showing him a drawing of a robin when he was very young. That seemingly simple event changed his life’s course. To the budding artist, what he was seeing was much more than a mere drawing of a bird. As he explains it: “My primary teachers instilled in me the beauty of all living things. I became enamored with life.”

He was inspired to “explore these forms in various media.” “As a student, teacher, artist and consultant I’ve done just that.”

So while in high school, he drew cartoons. He made pen-and-ink drawings of the apple orchards near Holden and studied art at San Francisco State. After graduating, he moved to Petaluma to become an art teacher. While in the army, his job was “sketching athletes for the military newspaper.”

Upon returning from active duty, Perkins took a job teaching in Oakland, settling in Daly City with his young family in one of Henry Doelger’s design-forward “little boxes.” Then, in 1963, he began his long fruitful relationship with the city of Burlingame, settling into a brand-new home in Mills Estates, starting his new job and beginning a residency that would eventually establish him as the “go-to” artist for his adopted home. In the “City of Trees,” Perkins found the perfect setting for his love of the natural world.

As former Burlingame Mayor Terry Nagel, who has worked with Perkins on several city projects, sums it up: “Dale understands our community’s passion for making Burlingame beautiful.”

Adds Leslie McQuaide, a member of the Burlingame Beautification Commission, which tapped Perkins to paint watercolors to accompany Commission Landscape Award winners’ plaques, “Dale is a treasure to the community. Not only has he beautifully captured the essence of our landscape award winners with his watercolors but he’s done so gratis, as a gift to the city.” 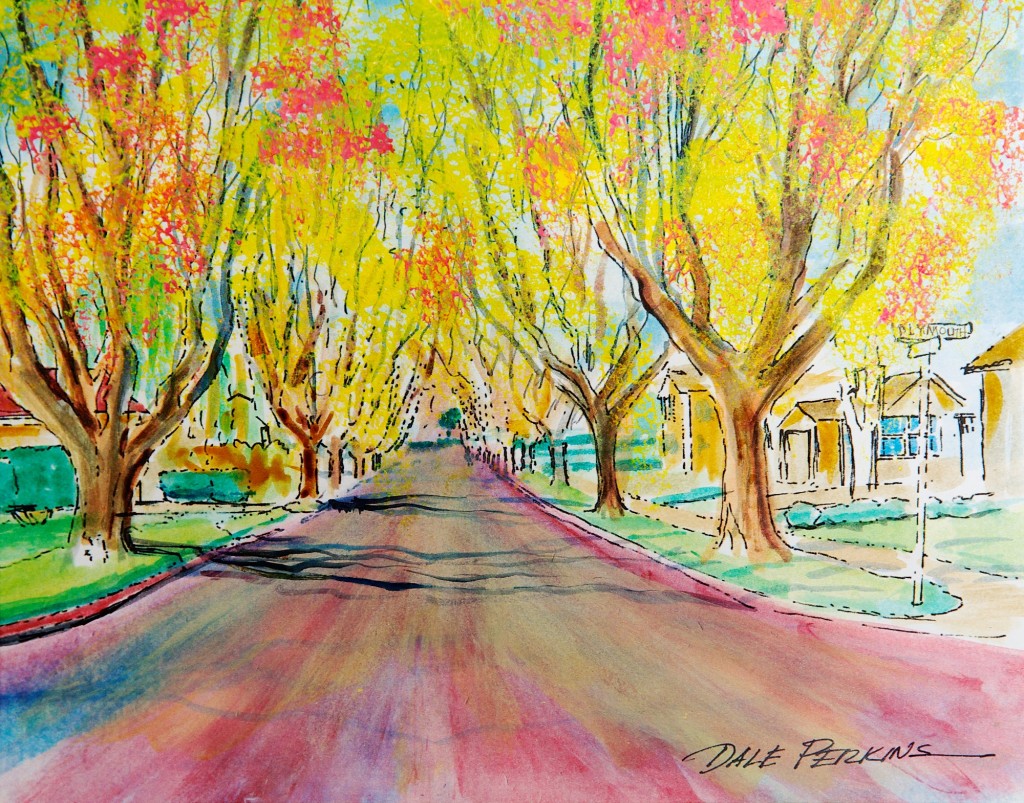 Between 1963 and 1989, when he retired from the Burlingame School District, Perkins also taught at San Francisco State, UC Berkeley, Notre Dame College (now Notre Dame de Namur University) and Canada College. Along the way he began showing his work in galleries – over 50 to date, including five in San Francisco and three in Burlingame. Not bad for a self-described “introvert” who grew up in a quarters so cramped he had to share a bed with his brother into his 20s.

Upon his retirement from teaching, Perkins dove into art full-time. Now in his early 80s, he continues to paint, maintaining a busy schedule of commissioned pieces, donated works (many for civic associations) and, naturally, art created for art’s sake. What time he doesn’t spend painting is devoted to his seven grandchildren and, recently, to re-landscaping his backyard. (“That took the better part of two months!”)

Perkins works out of the home he purchased in 1963. Examples of his work hang on almost every wall – large, glorious water colors featuring iconic San Francisco scenes and brilliant representations of nature. Perkins’ website trumpets his connection to San Francisco, but his walls reveal his equal passion for studying the nuances of natural world. “I do a ton of flowers, he says. “I love the detail.”

Helping Perkins build his website and market his work is his son, Tarny. Though not an artist himself, Perkins the younger credits his father for giving him an appreciation of art and, perhaps more importantly, of life itself. “One of the biggest compliments someone could pay me is this: ‘You’re just like your dad,’” he says. “His thirst for knowledge, his outgoing nature, his amazing skills…wow.”

Tarny sees his father as a latter-day George Bailey, but as one who needs no reminding that he’s had “A Wonderful Life.” “My dad is an amazingly positive person,” he says. “He’s curious and has a unique vantage point.” Growing up, Tarny says, the Perkins house was a non-stop parade of “dogs, stray cats, hamsters, rats, mice, parakeets,” reflecting Dale’s kind nature and love of living things.

“I’ve always believed that you can’t promote something you don’t really believe in,” Tarny Perkins continues. “Working with my dad on his website and promoting his artwork is really easy for me. (He’s taught me) to be positive, seek beauty and find rest in nature, and to keep an open mind.”

During his life Perkins has created art for friends, institutions, newspapers, community and state leaders, congressmen and causes. He’s taught children, adolescents and according to his son even once manned an “Art Mobile,” a “bus that he’d drive around for art shows.” Of late he’s put time into “more and more worthy causes without budgets – churches, non-profit foundations,” as well as work for paying clients. “Once I crossed the bridge about not worrying about making money, I started focusing on doing (work) for worthy causes and finding people who appreciate what I do,” he explains. “Also, I want to keep my name out there. Once you retire, it’s harder to do that.”

“Dale has been so generous, giving and helpful,” says Michael Ma, President of the Burlingame Library Foundation.

Perkins donates handmade watercolor notecards for the library’s annual Book and Author Luncheon, an event Ma says earns approximately $40,000 for the library each year. “He makes 500 to 600 notecards every year,” says a flabbergasted Ma. “He does them by himself. ‘What do you guys need? No problem!’ There’s no hesitation at all.”

Ma continues: “In 2013, when we honored Dale, his art was all over at the luncheon. Everyone wanted to buy some art. They asked Dale how they could do it. He was dumbfounded. He wasn’t sure he wanted to sell!”

“I want to apply my skills where they’re needed,” he says. “I always want to do the best that I can do, regardless of the time it takes,” says the man who’s given so much to Burlingame since his arrival, 50 years ago. “Each piece of art makes me feel relevant. Each client is a morale booster. There’s not enough money to take the place of a whole-hearted word of genuine praise.”

Dale Perkins’ career is one whose hallmarks have been art, teaching and service.

“I’ve been lucky. I really have. One miracle at a time.”

This profile is part of an ongoing series of features I’m doing on notable people who live and work in San Mateo County. It is written by Larry Rosen, a local freelance writer and former real estate columnist for the San Francisco Examiner from 2007 to 2013.